Can ‘Systemic Racism’ Be Eliminated? 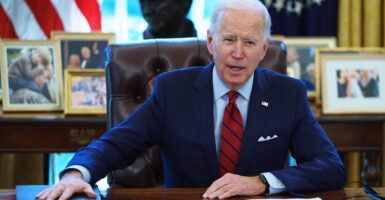 Second only to his fixation on “climate change” is President Joe Biden’s focus on “systemic racism.” In addition to reinstating mandatory race theory training for federal employees, Biden proposes spending even more money we don’t have to fix a problem beyond the government’s reach.

As with original sin, curing racism is best solved internally. It is a matter of the heart.

If racism is systemic, meaning it is embedded in white people, how is it possible to eliminate it? Do those on the receiving end of discrimination have a role to play? This is a question Democrats never address. If spending money is the key to limiting racism, more progress should have been made by now.

If white people are all inherently racist, then why have so many willingly contributed to causes and programs to lift poor people of color out of poverty to become self-sustaining? Why did so many white people vote for Barack Obama for president?

Part of the campaign against racism was Lyndon’s Johnson’s “War on Poverty.” According to the Cato Institute, a libertarian think tank, almost $23 trillion has been spent on programs to end poverty, but the poverty rate remains about the same. This is the definition of insanity, repeating the same behavior and expecting a different outcome.

In none of these pronouncements by Biden and the civil rights establishment does one hear about the personal responsibility of those who have the opportunity—if they make the right decisions, regardless of circumstances—to improve their lives.

Some years ago, I visited a Washington, D.C., middle school with the Rev. Jesse Jackson. The group of young people of color assembled in the school auditorium were focused on his every word. He admonished them to stay in school, study, not have kids out of wedlock, and stay off drugs. It was sound advice.

Why don’t politicians cite the successes and overcoming of obstacles by those who made right choices, instead of their constant focus on those who are making wrong choices? I think it’s because especially liberal politicians need a guaranteed base of voters who are addicted to government and, thus, to them, to sustain themselves in office.

Is it racist for teachers’ unions in big cities like Chicago to keep their schools closed, denying especially minority children a proper education? They are blaming COVID-19 for staying away, even though some scientists say children are least likely to catch the virus.

If kids are denied a quality education, they could end up in gangs, as some do. It might be argued that denying schoolchildren their right to a good education harms public safety. On an average weekend in most big cities, dozens are shot and killed. How many perpetrators of this random violence are high school or college graduates on a path to successful lives?

In his classic, multi-volume work, “Abraham Lincoln: The War Years,” Carl Sandburg writes of a meeting between a black delegation and the president one month before Lincoln issued The Emancipation Proclamation.

One of the men took notes on what Lincoln told them. Among many of his thoughts on race—some distasteful and some not—Lincoln said: “Success does not as much depend on external help as on self-reliance.” (Vol. 1, p. 575) Should that not resonate in our day?

The best approach to eliminating, or at least reducing racism is success. Telling stories and modeling those who have overcome hardships is better than singing, “We Shall Overcome Some Day.” Following Jesse Jackson’s advice to those schoolchildren can improve any life.