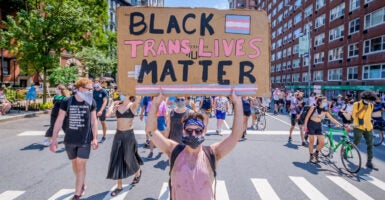 Marxism has three objectives: dehumanize all persons, demoralize all relationships, and decivilize all institutions, including the church. The current movement of trans activists is advancing this process, whether it knows it or not. (Photo: Erik McGregor/LightRocket/Getty Images)

The U.S. House of Representatives passed a new rules package that explicitly strikes “gendered language” from the official House rules. The rules prohibit the use of terms that designate the gender of familial relationships— father, mother, son, daughter, brother, sister, and so on—and replace them with gender-neutral terms.

Commentator Tammy Bruce, a radio and Fox Nation host, says this move Jan. 4 is “obscenely Marxist” because it “deconstructs what it means to be female.” She went on to say: “It reduces all of us, it eliminates the value of the individual and our uniqueness as individuals.”

The goal of social policing of our language is thought control, which epitomizes the Marxist agenda.

As one who was diagnosed with gender dysphoria, identified and lived as a woman for eight years, and now devotes my time to helping others who want to leave that life, I couldn’t understand the driving factor behind promoting “transgender identities”—especially among children—and harshly silencing and canceling all who disagree, by any means available.

After many years of helping people with “sex change” regret recover from a failed diagnosis of gender dysphoria, I finally see what drives the obsessive advocacy for gender-neutral language and transgender identities. As Bruce explained, it’s “obscenely Marxist” because it “deconstructs what it means to be female.”

The surge in the number of people expressing gender confusion makes sense when looked at through the lens of Marxism. The rapid onset of gender dysphoria provides cover for the dangerous onset and adoption of radical destructive Marxist ideas.

Marxism, with its guiding principle of abolish and destroy, goes a long way toward explaining today’s strident transgender activism. The forces behind the gender agenda have utilized Marxist techniques of silencing dissenters to coerce conformity from the general population.

I have watched well-respected physicians and gender researchers be defamed or forced out of their professions by an angry, vocal mob if they dared to discuss or study alternatives to “transition” for children. (Dr. Allan Josephson, Dr. Kenneth Zucker, James Caspian, Dr. Lisa Littman, to name a few.)

Intentionally or not, men who live as women, as I did, make a mockery of what it means to be a woman. Requiring the other 99.7% of the population to play along denies biological reality and amounts to gaslighting, forcing them to agree that men can become women and vice versa simply by declaring it.

On the other hand, forcing people to use non-gendered designations for family relationships further dehumanizes and demoralizes relationships.

This is consistent with Marxism’s atheistic, soulless ideology, which is fundamentally incompatible with the Judeo-Christian foundations of this nation. It brings “class struggle” from the economic into the cultural sphere by provoking clashes between ideas and people.

Cultural Marxism’s goal is to forcibly overthrow all existing social conditions and to centralize power in the hands of the state. It thrives on “us versus them” divisions, oppressed versus oppressor.

Karl Marx was a hater and an agent of evil. In the last century, the implementation of his ideas was responsible for the loss of 100 million lives worldwide.

Marx did not want debate—he sought overthrow by any means necessary.

Marxism has three objectives: dehumanize all persons, demoralize all relationships, and decivilize all institutions, including the church.

His ideological successors, Antonio Gramsci and the Frankfurt School intellectuals, who brought cultural Marxism to America, divided Americans into identity categories based on race, sex, sexual orientation, and gender identity, as Mike Gonzalez has described in his book “The Plot to Change America: How Identity Politics is Dividing the Land of the Free.”

Marxism vs. God and Church

Marxist objectives are diametrically opposed to faith in the God of the Bible, who made us in his image and put us in family relationships. Marxism is based on hatred of God and destruction of personhood, families, and church.

Its influence comes slowly at first, infiltrating the youth through school curriculum, until a generation that hasn’t been taught the dangers of these ideas is in leadership. Both young people and many Christians seem unaware of the danger of diluting the Bible’s message with Marxist ideas.

A recent documentary strives to help with that. “Wolf in Sheep’s Clothing II: The Gender Agenda” examines the origins of the so-called sexual revolution, with its current emphasis on gender dysphoria and homosexuality.

The film is a wake-up call for all who profess faith in Jesus Christ. (Full disclosure—I appear in the movie.) You can watch it here or buy it here.

In the movie, Paul Kengor, author and professor of political science at Grove City College, says that current revolutionaries understand “what earlier radical movements such as the communist movement understood, which is that you’ve got to take down God … because religion gets in your way.”

Kengor’s recent book, “The Devil and Karl Marx,” documents what he calls “the genuinely diabolical elements of Marx and Marxism.” His goal is to “equip conservatives with essential facts and truths our side must know about this awful, resurgent ideology.”

Christians must wake up and realize the endgame of Marxism is to overthrow and destroy individuals, families, God, and church. Avowed socialists and Marxist sympathizers—such as Raphael Warnock, the newly elected Democrat senator of Georgia; Cori Bush, a new Democrat member of Congress representing Missouri; and the far-left congresswomen collectively known as “the squad”—are gaining power in our country.

Yuri Bezmenov, a Soviet defector and former propagandist and KGB operative, laid out in excruciating detail in a 1985 interview the process by which a free society can be brought to collapse: demoralization, destabilization, crisis, followed by normalization—a propaganda term that can be taken to mean “a new normal.”

We must oppose Marxism in all its forms, economic and cultural, because it threatens to destroy our freedoms. We are amid this collapse and need to speak up in our churches and to our government officials.

With the change in administration, implementation of a Marxist agenda can happen quickly. Our response must begin now.