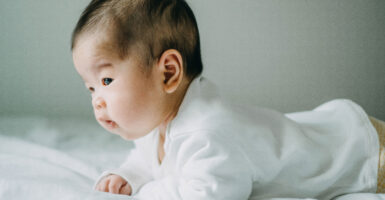 "We resolve to end the practice of abortion and to value all innocent life as sacred," says Rep. Andy Biggs, R-Ariz. (Photo: d3sign/Getty Images)

“The next four years of the Biden administration will bring out the worst abortion policies and edicts that our nation has experienced since the Roe v. Wade decision,” Biggs said in a statement provided to The Daily Signal.

He added that “the pro-life community will rise above these challenges to grow our movement and to bring about an end to abortion on-demand.”

“We reflect on these innocent human beings and their God-given potentials extinguished by cruel instruments or medication,” says Biggs. “We mourn with the families who have experienced great regret over their abortions. We pray for healing for all of the mothers who have chosen the path of abortion for their little ones.”

The first bill, originally introduced May 15, 2019, and dubbed the Abortion Is Not Health Care Act, would terminate the Internal Revenue Service’s treatment of out-of-pocket abortion costs as a medical expense.

The second bill, the Pregnant Women Health and Safety Act, covered by The Daily Signal last year, would require that all abortion providers have admitting privileges at a local hospital and comply with basic safety standards.

Introduced Jan. 21, 2020, the legislation requires that a doctor performing an abortion “have admitting privileges at a hospital located within 15 miles from the principal medical office of the physician and the location in which the abortion is being performed.”

The third bill, per Biggs’ office, is a “resolution recognizing the importance of access to comprehensive, high-quality, life-affirming medical care for women of all ages.”

It identified Pro Women’s Healthcare Centers, which include a dozen locations across the country, as a collection of health care centers that “serves as an example of the high-quality, comprehensive, life-affirming care that women deserve.”

Biggs’ office said it expects the bills to be referred to House committees such as the Ways and Means Committee, the Energy and Commerce Committee, and the Judiciary Committee.

Biggs also said, “We resolve to end the practice of abortion and to value all innocent life as sacred,” adding:

Since the contemptible Roe v. Wade decision, Americans have made great strides across the nation to protect the lives of the unborn. I am pleased to represent one of the most pro-life states in the union, Arizona, and to have had the privilege of fighting for life for decades. To this end, I have reintroduced three pieces of pro-life legislation to reaffirm our values and to ensure that mothers and their unborn children are protected.