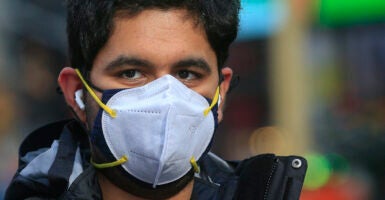 A man wears a double mask as he visits Times Square in New York Dec. 10, 2020. President-elect Joe Biden says he will ask Americans to wear masks for the first 100 days of his administration to curtail the spread of the coronavirus. (Photo: Kena Betancur/AFP/Getty Images)

COVID-19 cases and deaths continue to surge. The seven-day moving average of daily confirmed new cases eclipsed 260,000 on Jan. 9, the highest rate yet recorded. The U.S. is expected to reach the grim milestone of 400,000 COVID-related deaths later this month, around the anniversary of its first confirmed case.

These numbers suggest that the strategy of relying predominantly on social distancing, lockdowns, and mask-wearing is not working. We need better interventions.

Some have called for national mask mandates. We recently examined the effects of mask mandates in the U.S. and Italy, and our findings are not encouraging.

Of the 25 U.S. counties reporting the highest number of new cases during the current surge, 21 had mask mandates in place before August. Looking at the 100 counties with the most confirmed cases during this period, 97 had either a county-level mask mandate, a state-level mandate, or both. Of these 97 counties, 87 instituted their mandates prior to October.

Mask mandates failed to prevent a surge in cases in other countries as well. Italy enforces a national mask mandate, imposing fines of up to 1,000 euros. That mandate did not prevent a surge of cases that began in October and peaked in mid-November. As of early January, Italy was still recording new infections at four times the early October rate.

Our findings do not deny the efficacy of mask-wearing. Nor should they discourage the practice. Public health authorities in the U.S. and throughout the world cite studies showing that mask-wearing slows the pathogen’s rate of spread.

Although mask-wearing may reduce transmission rate, it has not prevented cases from spiking either here or abroad.

Governments should pursue additional strategies. These include adopting better measures to protect nursing home residents and enabling nationwide screening through the widespread use of rapid self-tests.

The U.S. and other governments have done an abysmal job at protecting nursing home patients. As of Jan. 7, U.S. nursing home residents accounted for less than 0.5% of COVID-19 cases but 37% of COVID-related deaths.

Cases and deaths continue to mount even as the process of vaccinating residents and staff has begun. The current federal policy of requiring weekly tests of staff and temporal thermometer screenings of visitors is inadequate. Government should require daily testing of staff, at least until all residents and staff have been immunized. Visitors should be tested before entering the facility.

Government should also take steps to protect the general population. The distribution of rapid, at-home tests that don’t require a prescription or laboratory analysis would inform people of their COVID-19 status and limit the disease’s transmission.

The technology exists to produce low-cost, rapid home tests in sufficient volume for tens of millions of Americans to test themselves daily. Unfortunately, the U.S. Food and Drug Administration has not approved these tests. The agency’s concern is that self-administered, in-home tests are less sensitive than laboratory-analyzed tests used for clinical diagnosis. This view allows the perfect to be the enemy of the good.

Acknowledging this, Dr. Anthony Fauci, director of the National Institute of Allergy and Infectious Diseases, recently embraced the notion of “flooding the system with tests, getting a home test that you could do yourself, that’s highly sensitive and highly specific.”

Rapid tests are marginally less accurate, but that is more than offset by their volume (testing tens of millions of people daily, as opposed to 2 million), frequency (people can test themselves often), and immediacy (results within minutes, rather than days).

Unlike mask-wearing and lockdown edicts, widespread self-testing is neither culturally nor politically divisive, making it more likely to gain population-wide acceptance. It combats the contagion by empowering and informing people, not confining them, restricting their activities and suggesting that they are to blame for the spread of a contagious pathogen.

Equipping people to make the best decisions for themselves, their families, and their fellow citizens offers a promising new approach to combating the pandemic.