In Past 20 Years, Democrats Objected 3 Times to Electoral College Certifications 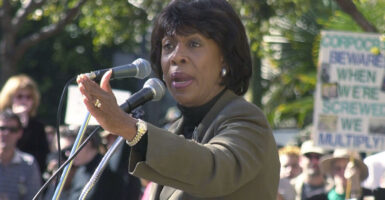 Recent precedents for challenging Electoral College certification in Congress have come not from Republican lawmakers, but from Democrats.

Over the past 20 years, Democrats have on three separate occasions objected to the validity of electoral votes on the floor of Congress. Wednesday, Jan. 6, will mark the first time Republicans choose do so in the past two decades.

“I cannot vote to certify the Electoral College results on January 6 without raising the fact that some states, particularly Pennsylvania, failed to follow their own state election laws,” Sen. Josh Hawley, R-Mo., wrote in a statement Dec. 30.

About a dozen Republican senators and about 140 GOP House members are expected to challenge electoral slates during Wednesday’s joint session of Congress.

On Jan. 2, Sen. Ted Cruz, R-Texas, released a joint statement with 10 other GOP lawmakers announcing that they “intend to vote on January 6 to reject the electors from disputed states as not ‘regularly given’ and ‘lawfully certified’ (the statutory requisite), unless and until that emergency 10-day audit is completed.”

In the statement, Cruz called upon Congress to “appoint an Electoral Commission, with full investigatory and fact-finding authority” to conduct an audit of election results before Inauguration Day on Jan. 20. Once the audit was completed, states “would evaluate the Commission’s findings and could convene a special legislative session to certify a change in their vote, if needed.”

Since the passage of the Electoral Count Act of 1887, which provides a legal avenue for members of Congress to challenge electoral votes under the Constitution, Democratic lawmakers have objected to election outcomes on several occasions, including in 2001 and 2005, and as recently as 2017.

In 2001, House Democrats challenged the certification of electoral votes for then-Texas Gov. George W. Bush, a Republican, but the objection failed because no senator agreed to sign the written objection.

“The objection is in writing, and I do not care that it is not signed by a member of the Senate,” Rep. Maxine Waters, D-Calif., said during the 2001 joint session of Congress.

“The chair will advise that the rules do care,” then-Vice President Al Gore, ceremonially presiding over the session, told Waters. Gore was overseeing the very session that would confirm his loss to Bush.

A similar situation occurred in 2017, when then-Vice President Joe Biden oversaw certification of the electoral votes that handed the presidency to Donald Trump. House Democrats challenged the electoral slate, but to no avail, because they lacked support in the Senate.

“It is over,” Biden told Rep. Pramila Jayapal, D-Wash., who objected to the election results during the 2017 session.

The certification challenge in 2005 was the only instance in recent years in which both a senator and a House member signed a formal objection to an electoral slate. Then-Rep. Stephanie Tubbs Jones, D-Ohio, and then-Sen. Barbara Boxer, D-Calif., together challenged Bush’s victory in Ohio on grounds of alleged voter irregularities.

The House and Senate adjourned and met separately for no more than two hours, as the Constitution stipulates, but ultimately neither Jones nor Boxer was able to gain enough votes from their respective colleagues to alter Ohio’s electoral slate.

A tweet Monday from conservative author and filmmaker Dinesh D’Souza shared a video compilation of some of the times Democratic lawmakers have objected to Electoral College certification over the past 20 years.

Sen. Dick Durbin, D-Ill., praised Boxer for her actions in 2005, saying: “Some may criticize our colleague from California for bringing us here for this brief debate. I thank her for doing that, because it gives members an opportunity once again on a bipartisan basis to look at a challenge that we face not just in the last election in one state, but in many states.”

Durbin subsequently voted to certify Bush’s win of Ohio, however.

In response to Hawley’s statement announcing his intent to object to the Electoral College certification on Jan. 6, Durbin wrote in a tweet Dec. 30 that Hawley was engaging in the “political equivalent of barking at the moon.”

“This won’t be taken seriously, nor should it be,” Durbin continued.

It appears unlikely that the challenges made by GOP senators and House members will alter the election outcome, given that a majority vote is required in both chambers of Congress to overturn a state’s electoral slate.