Under Trump’s Tenure, Promises Made Were Promises Kept 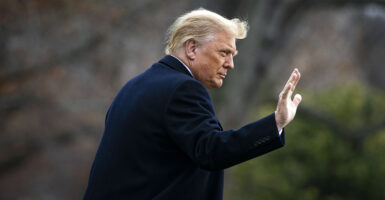 President Donald Trump waves as he departs on the South Lawn of the White House, Dec. 12. (Photo: Al Drago/Getty Images)

A retrospective on President Donald Trump’s four years in office must be put in perspective of what he himself promised to accomplish when he ran: Make America Great Again.

To answer the question requires, of course, defining what makes America great and asking to what extent Trump put the nation on course toward this goal.

If one believes, as I do, that what makes America great is that it must be a free nation under God, that this stands at the core of what makes the nation prosperous and moral, I think Trump’s achievements have been significant.

Probably the greatest paradox of this election is the Gallup poll done in September asking whether registered voters were “better off now” than they were four years ago.

The 56% who responded yes was the highest percent under any president running for reelection since the question was first asked, when Ronald Reagan ran for reelection in 1984. Based on this, we would have expected Trump to be reelected in a landslide.

I would list major achievements of the Trump presidency under three headlines: economic reform that restored robust economic growth; appointment of federal judges across the nation, up to the Supreme Court, who will restore a federal judiciary guided by conservative principles; and achievement of a new peace in the Middle East that seemed beyond anyone’s reach.

Another point of critical importance is that Trump policies have been a boon to America’s minorities. Despite the success of left-wing demagogues in portraying the Trump presidency as racist, facts show truth to be the complete opposite.

The 2017 Tax Cuts and Jobs Act fueled economic growth that the nation had not seen in years.

This was aided further by deregulation. Tax cuts and deregulation targeted at restoring the global competitiveness of American business and restoring conditions friendly to investment fueled job growth and an unemployment rate of 3.5% that no one thought possible.

And, as reported by The Wall Street Journal: “Median weekly full-time earnings for blacks increased 19% in Mr. Trump’s first three years, to $806. That followed a period of 11% growth during Mr. Obama’s seven post-recession years in office.”

According to the Federal Reserve’s 2019 Survey of Consumer Finances, the largest growth in household net worth from 2016 to 2019 occurred in households in the lowest 20% of income, 34.3%.

With the confirmation of Trump’s last Supreme Court appointment, Justice Amy Coney Barrett, we now have a Supreme Court with a solid 6-3 conservative majority.

This in the overall context of 220 federal judicial appointments made by Trump, establishing a powerful conservative basis in law for our free nation under God.

Despite what liberals say, this is enormously important for minority Americans. An example is the Supreme Court ruling earlier this year in the Espinoza v. Montana Department of Revenue case, which found unconstitutional the state prohibition of use of public funds for scholarships to attend private religious schools (known as the Blaine Amendment). This is a boon for school choice that poor and low-income Americans vitally need.

And, of course, a conservative court raises the possibility of stopping the abortion carnage that is devastating black America.

Trump’s courage in moving the American Embassy in Israel to Jerusalem and recognizing Jerusalem as Israel’s capital shined light throughout the world. And now we are seeing new peace agreements between Israel and Arab and Muslim nations that no one ever thought possible.

This is called leadership.

Despite the noise and distortions from the left, facts say that Trump made major achievements in moving toward making America great again.