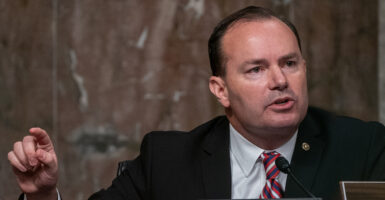 “At this moment in the history of our diverse nation, we need our federal government and the Smithsonian Institution itself to pull us closer together and not further apart," Sen. Mike Lee, R-Utah, says in a statement from the Senate floor. Pictured: Lee asks a question of former FBI Director James Comey at a hearing of the Senate Judiciary Committee in Washington, D.C., Sept. 30. (Photo: Ken Cedeno-Pool/Getty Images)

Until Sen. Mike Lee, R-Utah, recently stood up as the voice of reason, and blocked a museum dedicated to those Americans the government hives off as “Hispanic” or “Latino,” it looked like conservatives had learned all the wrong lessons from their recent success with those voters.

“I understand what my colleagues are trying to do and why. I respect what they’re trying to do. I even share their interests in ensuring that these stories are told. But the last thing we need is to further divide an already divided nation with an array of segregated, separate-but-equal museums for hyphenated identity groups,” said Lee in a statement from the Senate floor about the Smithsonian Institution museum that up to that point seemed all but a fait accompli, having gathered bipartisan support.

“At this moment in the history of our diverse nation, we need our federal government and the Smithsonian Institution itself to pull us closer together and not further apart,” the Utah Republican went on.

Lee’s procedural hold withholds unanimous consent, meaning that it would force an actual voice vote, and his colleagues would have to go on the record. So we still don’t know what will happen.

But his statement couldn’t have been more accurate, or filled with more common sense. The last thing America needs is the “separate-but-equal” approach that Lee rightly excoriated.

Unfortunately, that kind of wisdom is anything but common, on either side of the aisle.

In Indiana, Gov. Eric Holcomb, a Republican, recently announced the appointment of a “chief equity, inclusion and opportunity officer” (the “first ever,” of course); in the House of Representatives, Minority Leader Kevin McCarthy kept tweeting that the “Republican Party is stronger because of our diversity,” months after enthusiastically endorsing an office of “diversity and inclusion.”

And of course, some of the usually more clear-headed Republicans in the Senate had signed up for the aforementioned “Latino Museum.” Yes, that included even rock-ribbed conservatives such as Sen. Ted Cruz of Texas, who seems to have gotten some bad advice from his staff.

All these things sound good on the surface. Who could be against “diversity and inclusion” after all, not to mention a museum dedicated to 57 million Americans and their ancestry?

Easy. Any American who understood that all these concepts and endeavors form an integral part of the leftist project that intends to reimagine America as a confederation of categories—often created by government itself at the instigation of leftist crusaders—whose members are instilled with grievances. These carefully nursed gripes would then be the fuel that would transform America, which is always the end goal.

As my colleague Jonathan Butcher and I recently wrote in a Heritage backgrounder on critical race theory, in the mouths of its practitioners, “equity” is the opposite of equality because it “means inequality of treatment.” Diversity, meanwhile, means “enforced diversity through the use of mandated or recommended quotas,” something which always produces suboptimal outcomes.

No, Leader McCarthy, parties are stronger when they color-blindingly bring Americans together under a congruent governing philosophy, and inspire them to common purposes.

The museum in question is Exhibit A of how innocuous-sounding efforts go to work on behalf of the left’s grievance-churning machine. On its face, nothing possibly could be wrong. Museums are places of learning, inspiring attendees to reflect or bask in the beauty of some great work.

But museums do something else: they archive. In this case what would certainly be curated are grievances.

As I explain in my book “The Plot to Change America: How Identity Politics is Dividing the Land of the Free,” we live now under what the sociologists Jason Manning and Bradley Campbell have dubbed a “culture of victimhood.” Under this new dispensation, victimhood, not ability, becomes the new way to acquire moral status.”

Key to this process is the curating and exhibiting of resentment. “All perceived grievances, even the most minor and inadvertent (microaggressions) have to be carefully catalogued and publicized, in order to make the case for structural oppression,” I write in my book.

How do we know that this is how the museum would be used? Just listen to one of its main supporters, Sen. Bob Menendez, D-N.J.

This museum, clearly, would be used to further cement the idea that all Americans with a background in Latin America or Iberia form an ethnic category (perhaps soon to be a racial one, if progressives get their way at the Census Bureau) and, much more importantly, as we have seen, that the members of said category are victims of society. Building it would be against conservative interests.

Backing it, moreover, misreads the support that President Donald Trump drew in the November election from Americans of Cuban, Venezuelan, and Colombian origin in Florida, and of Mexican descent in South Texas. It had nothing to do with victimhood and everything with preserving America and its system.

Why it took the courage, and clear-eyed view, of one lone senator from Utah to stop the museum is a bit surprising.