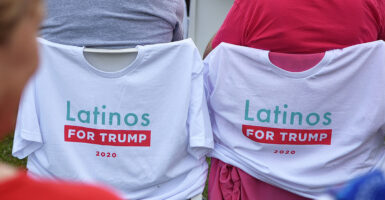 T-shirts were placed on chairs by people waiting for Vice President Mike Pence to arrive to speak at a Latinos for Trump campaign rally at Central Christian University on Oct. 10 in Orlando, Florida. (Photo: Paul Hennessy / NurPhoto / Getty Images)

President Donald Trump captured the state of Florida on Tuesday night, in no small part by overperforming expectations with the Latino vote, according to statistics and media pundits.

The liberal New Yorker magazine tweeted: “In every Presidential election since 1992, the winner of Florida has gone on to the White House. This year, Donald Trump made Miami’s Latin-American community a major focus in his reelection effort.”

In an evaluation of the states of Florida, North Carolina, and Georgia, The New York Times determined that Hispanics increased their vote for Trump by 11 percentage points, having voted 62% for Hillary Clinton in 2016, but just 51% for Joe Biden in 2020.

“If Trump wins Florida, it will be a tribute to an incredibly robust state operation that focused like a laser beam on the Latino vote, with compelling Spanish-language ads and pointed messaging, particularly around socialism,” National Review editor Rich Lowry tweeted.

A Telemundo poll last week found Florida was an outlier for the Latino vote, as it was much closer there than in Arizona or Nevada.

Even with a Florida victory, Harry Zahn of PBS’ “NewsHour” noted that Trump still has much ground to make up.

“Trump has performed well in Florida. Did a good job cutting into Clinton leads among Cuban/Latino vote,” Zahn tweeted. “But a loss in either Ohio or North Carolina would be a heavy blow to Trump’s electoral map.”

Trump made a strong play during the campaign for the Hispanic vote in Florida, as much of that population is from Cuba and Venezuela, where people once lived under socialist tyrannies.

“Thousands of Republicans are waiting for Trump to touch down in Miami in his final push for votes in the critical swing state,” a producer at Britain’s ITV tweeted Nov. 1. “His route back to the White House is virtually impossible without winning Florida, and tonight, he is targeting the key Latino vote.”