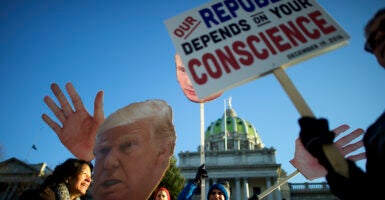 Donald Trump protesters demonstrate outside the Pennsylvania Capitol before electors arrive to cast their votes from the election Dec. 19, 2016, in Harrisburg, Pennsylvania. Electors from all 50 states cast votes today in their respective state capitols. Trump won Pennsylvania by less than 1%, the first Republican to carry the state since George H. W. Bush in 1992. (Photo: Mark Makela/Getty Images)

Many on the left were indignant when the Trump campaign legal team tried to convince legislatures in several battleground states to appoint a new slate of electors after asserting election irregularities.

However, four years ago, many Democrats, liberal activists, and Hollywood stars tried to pressure electors to reverse the results of the November election.

Here’s an excerpt from my book “Abuse of Power: Inside the Three-Year Campaign to Impeach Donald Trump,” explaining Democrats’ effort to thwart President Donald Trump’s election.

Strangely enough, many of the same people who complained Trump would be president despite losing the national popular vote were suddenly willing to give the presidency to someone who wasn’t on the ballot and had zero votes for president.

Rep. Jim Himes, D-Conn., framed altering the Electoral College vote as a way to prevent a soft Russian takeover of the United States.

“This man is not only unqualified to be president, he’s a danger to the republic,” Himes said. “I do think the Electoral College should choose someone other than Donald Trump to be president. That will lead to a fascinating legal issue, but I would rather have a legal issue, a complicated legal problem, than to find out the White House was now the Kremlin’s chief ally.”

Christine Pelosi, a California elector and daughter of House Democratic leader Nancy Pelosi, took up the mantle for a potential Electoral College coup.

The younger Pelosi led a letter signed by 53 other electors—including one rogue Republican from Texas—addressed to the director of national intelligence, James Clapper, requesting the intelligence community provide a briefing on Russian interference for the full Electoral College before it convened in 50 state capitols.

“We do not understand our sole function [to be] to convene in mid-December, several weeks after Election Day, and summarily cast our votes,” said the letter. “To the contrary, the Constitution envisions the Electoral College as a deliberative body that plays a critical role in our system of government—ensuring that the American people elect a president who is constitutionally qualified and fit to serve.”

As the chairwoman of the California Democratic Party Women’s Caucus, Christine Pelosi had been “thoroughly convinced that this would be my opportunity to cast a vote for the first woman president of the United States.”

To that end, she petitioned to be an elector. Despite the letter extolling the deliberative role of the Electoral College, she said in an interview with the left-wing Democracy Now! broadcast that she would prefer to scrap it.

Then, there was a group calling themselves the Hamilton Electors, named for Alexander Hamilton, who said that the Electoral College existed to ensure “the office of president will never fall to the lot of any man who is not in an eminent degree endowed with the requisite qualifications.”

Bret Chiafalo, an elector from Washington state, and Michael Baca, an elector from Colorado, started the effort. “We’re trying to be that ‘break in case of emergency’ fire hose that’s gotten dusty over the last 200 years,” Chiafalo told The Atlantic.

They first sought the near-unattainable goal of uniting 135 Republicans and 135 Democrats behind a compromise Republican: John Kasich or maybe Mitt Romney. A slightly more realistic alternative was to convince 37 Republican electors to stray from Trump, bringing his total below the needed 270 electoral votes. That would send the election to the House of Representatives.

In addition, Clinton electors in California, Colorado, and Washington filed lawsuits to overturn state restrictions on electors from voting however they wish. This was supposed to set a legal precedent to allow Trump electors to break.

Hollywood even got in on the act. In an ad sponsored by United For America, Martin Sheen, star of NBC’s “West Wing,” was joined by other Hollywood stars, including Debra Messing, Richard Schiff, and Bob Odenkirk, for a political ad.

The audience was the Republican electors. Each actor stated, “I’m not asking you to vote for Hillary Clinton.” They then requested that Republicans in the Electoral College be an “American hero” by keeping Trump out of the White House through their “service and patriotism to the American people.

On Dec. 19, a total of seven electors bolted from the candidate who had won their state. But despite the left’s efforts, the closest thing we saw to a revolt came from Clinton electors.

On the Republican side, Ohio Gov. John Kasich and former Texas U.S. Rep. Ron Paul each got one vote from rebel Texas Republican electors. The final tally was Trump 304, Clinton 227.