Hanukkah, Made in the USA 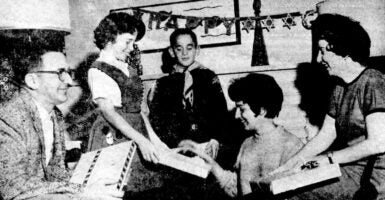 Most American Jews celebrate Hanukkah, at least with a family dinner or the lighting of a menorah, and in America, most non-Jews have heard of the holiday.

It’s easy to find Hanukkah goods at Target, Hanukkah TV specials, and since 1979, a menorah has been erected annually on the White House Ellipse.

Considering that Jews comprise only about 1.8% of the population, Hanukkah’s presence in America’s public square is remarkable.

That’s even more so the case because, unlike Christmas, which holds significant religious importance for Christians, Hanukkah is a relatively minor Jewish holiday.  In fact, only 38% of Israeli Jews think Hanukkah is one of the three most important Jewish holidays, whereas 68% of American Jews do.

Hanukkah, which isn’t even mentioned in the Hebrew Bible, commemorates the Jewish military victory over the Greeks, who once ruled over what is now Israel about 167 BCE.

The king, Antiochus IV, forbade Jewish worship and practices. Hanukkah’s hero, Judah Maccabee, led the Jews in defeating Antiochus’ oppressive regime. The Jews returned to the temple after their victory to resume the rituals that had been forbidden under Greek rule, including lighting the temple’s menorah, which Scripture commands be lit from night to morning using only pure olive oil.

The Jews had enough oil to last only one day, but—miracle of miracles—it burned for eight days, until more could arrive, and thus we celebrate Hanukkah.

Hanukkah is a story of freedom from oppression and the miracles that follow. Today, it’s celebrated with menorah lightings, dreidel games, and fried foods, such as latkes (potato pancakes) and sufganiyot (doughnuts).

These joyful rituals have contributed to its popularity. But America’s embrace of Hanukkah can be attributed to something more enduring; namely, America’s founding principles.

America’s beginnings were inspired by freedom, as evidenced when the Pilgrims, seeking religious liberty, landed at Plymouth Rock. These ideals were later codified in our Constitution, which mentions the word “religion” only once—in the First Amendment, in which every citizen is guaranteed the right to worship freely, no matter their religion.

Jews had faced oppression in nearly every country in which they lived. But America gave Jews their first home that was uniquely founded on the idea of religious freedom for all people.

Religious freedom, however, was more than a legal concept. In George Washington’s letter to the Newport, Rhode Island, Hebrew congregation, he wrote, “May the Children of the Stock of Abraham, who dwell in this land, continue to merit and enjoy the good will of the other Inhabitants; while everyone shall sit in safety under his own vine and fig tree, and there shall be none to make him afraid.”

Washington wanted America to live out its founding principles of freedom and equality, and to embrace the Jewish people. The vine and fig tree, biblical allusions to the Promised Land (Deut. 8:8), suggest that America was a new home in which Jews would not just live, but flourish.

Washington’s desires for America’s Jews proved to be true.

In the late 19th century, American industrialization rose, and Americans, including Jews, had modest amounts of disposable income. They were eager to use that money to buy goods that reflected their priorities, and that included their religious sentiments. Companies responded by selling Christmas decorations and food, and Hanukkah soon followed.

As early as 1919, Aunt Jemima touted its flour as “the best flour for latkes.” The 1950s saw a cottage industry spring up in paper dreidels, and American Jews adorned their homes with blue and white crepe paper and glitter dreidels.

The free market spoke, and in America, it also spoke Yiddish.

America’s unique mix of religious and economic freedom has allowed the Jews to prosper, and in turn, America has embraced Hanukkah.

Hanukkah ends on Friday, and 2020 is drawing to a close. It’s been a difficult year with the coronavirus pandemic, unemployment, and a seemingly endless culture war, whose biggest casualty is our belief in the American experiment.

It’s my hope that this holiday season and Hanukkah give us an opportunity to reflect on what’s great about America; namely, that we are a country founded on freedom.

Nearly 2,200 years ago, an army of underdogs, the Maccabees, fought for and won their freedom, and a miracle soon followed. That might explain Hanukkah’s popularity in America. After all, the American story is a story of struggle, freedom, and what can only be explained as a few miracles along the way.