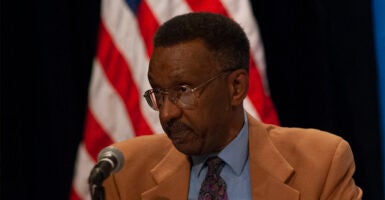 Walter Williams, Ph.D., became one of the nation's most articulate advocates of American-style liberty and capitalism. (Photo: The Heritage Foundation)

Sometimes, the legacy of great men is that the world doesn’t realize how great they were until they are gone.

This might be the case with Walter E. Williams.

Williams passed away last week. He was the John M. Olin distinguished professor of economics at George Mason University, where, for six years, he served as chairman of the economics department. He was a prolific author and columnist (writing for Creators, which also syndicates my column). And he was a dear friend.

An African American who grew up poor in Philadelphia, he was raised by a single mother and, at one time, drove a cab.

He became hooked on economics when he took his first courses on the subject and went on to earn his doctorate at the University of California, Los Angeles.

Williams became one of the nation’s most articulate advocates of American-style liberty and American-style capitalism. He was one African American who truly believed in and wanted what the civil rights movement claimed as its goal: real freedom for all.

He spoke about “the morality of markets.” He put it this way in one interview:

The areas that we have the greatest satisfaction or the fewest complaints are places like the supermarket or the clothing store, or in computers or cellphones. And what’s the motivation of the producers? It’s for profit. But look at the areas where we are dissatisfied—it’s public education, it’s the city sanitation department, it’s the public transportation, it’s the motor vehicles department. Look at the stated motivation in these areas: It’s where there is caring but where there is no profit motive.

The profit motive, he continued, “forces the producer to try to find what people want, and to produce what they want. At the same time, it forces them to provide human wants in a way that economizes on the usage of scarce resources.”

Government, on the other hand, is about “coercion,” Williams explained. The country’s Founders understood that there are legitimate functions of government but limited it through the Constitution “because they recognized that the potential for abuse was so great.”

Williams saw freedom as the solution and government as the problem. This put him at odds with most black politicians, who, despite allegedly having the civil rights movement’s goal of freedom, saw increasingly more government and political coercion as the means for improving the lot of black Americans.

The result has been more politicization of race, rather than less.

The civil rights movement was supposed to be about purging racism and raising human dignity. But there is probably at least as much rhetoric and public obsession about race today as ever.

Ironic is that, today, the enthusiasm for the politicization of race may be coming more from white liberals than from young blacks.

The Wall Street Journal recently reported on the increasing number of startups founded by young black entrepreneurs, who are turning to venture capitalists for funding. It quotes black entrepreneur Joseph Heller, founder of a startup that “connects custom-merchandise businesses with manufacturers in China.”

“I think access to capital and entrepreneurship is the next civil-rights movement,” notes Heller.

“If you think about every issue of inequality today, it all stems from economic inequality,” says Heller. “You could talk about policing and things like that, but really that’s an economic issue too. And so the only way you’re really going to address that is through entrepreneurship.”

According to the ProjectDiane survey, reports the Journal, as of this year, “female black and Latina founders … have raised a cumulative $3.1 billion—more than triple the $1 billion they had raised as of 2018.”

It’s what Williams called the “morality of the marketplace”—the allocation of resources driven by freedom, merit, creativity, and excellence—that is freeing black Americans, body, and soul.

More young blacks are understanding that racial stereotyping, rather than less government coercion and control, is the problem, not the solution.