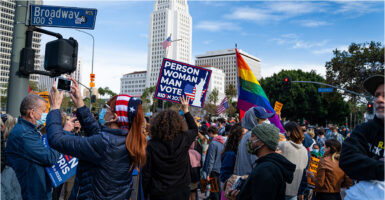 The temporary order, which is set to last three weeks, bars all public and private gatherings with individuals outside of one’s own household, but allows the “constitutionally protected rights” to protest and attend religious services, according to KTLA.

“We know we are asking a lot from so many who have been sacrificing for months on end and we hope that L.A. County residents continue following Public Health safety measures that we know can slow the spread,” Public Health Director Barbara Ferrer told KTLA.

“Acting with collective urgency right now is essential if we want to put a stop to this surge,” she continued. “Please remain home as much as possible and do not gather with others not in your household for the next three weeks.”

Two months ago, it was projected that one in every 880 L.A. County residents were infected with COVID-19. Now, it’s estimated it’s one in every 145.

We have to act now to slow the spread.

Please stay home as much as possible.

Schools and day camps are also mandated to close if they have more than three COVID-19 cases, and gatherings at playgrounds, card rooms, and outdoor dining restaurants have been banned altogether, according to KTLA. Outdoor activity participants are required to be masked and must all be part of the same household.

Thousands of Los Angeles residents gathered en masse to celebrate Joe Biden’s projection to win the presidency earlier in November, according to CBSLA. The rally followed months of nationwide racial equity protests and riots after George Floyd died in May.

Thousands out in Los Angeles to celebrate the electoral loss of Trump and demand he pack his bags & concede. #YoureFiredTrump #ByeByeTrump pic.twitter.com/jTS9lAlxYH

Los Angeles County is under “Threat Level Red” with nearly 388,000 virus cases and approximately 7,600 deaths, according to a local government webpage.