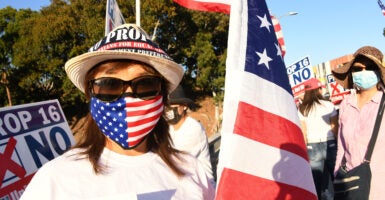 Opponents of California's Proposition 16 ballot initiative demonstrate on a downtown Los Angeles freeway overpass on Oct 30. The measure, which would have reinstated affirmative action in the state, lost in a landslide on Nov. 3. (Photo: Araya Diaz/Getty Images)

President Donald Trump’s getting a greater share of the black vote than the average Republican candidate and California voters’ rejection of affirmative action, an effort led by Asian Americans, are being seen as hopeful signs for a multi-ethnic conservatism.

“So, what you’re seeing is people realizing that their lot is with an American way, a seeking of an American system,” Francisco “Quico” Canseco, director of the Election Protection Project at the Texas Public Policy Foundation, said at a recent webinar hosted by The Heritage Foundation.

“With Donald Trump, I think what happened is that an appeal to a lot of these people, that there was a certain sense of machismo, and in the president in getting things done and really serving the people with palpable, tactile facts of what he did on the ground,” said Canseco, a former congressman from Texas.

Ying Ma, another presenter, was the communications director for the successful “No on Prop 16” campaign, in which California voters this month rejected Proposition 16, which would have reinstated affirmative action in state law.

The ballot measure would have repealed Proposition 209, a law enacted by California voters in 1996 that banned affirmative action.

Proposition 16 would have permitted universities, community colleges, and other public institutions to take into account race, gender, and ethnicity when hiring, awarding contracts, and accepting students into schools.

Opponents said that the rejection of Proposition 16 by 57% of the vote was monumental because voters saw the failure of identity politics.

“In many ways, this was a rejection of a number of long-standing Asian-American groups that have for decades failed so spectacularly at serving the people they claim to represent,” Ma said, adding:

Ma, a Chinese immigrant to America and author of the autobiographical “Chinese Girl in the Ghetto,” said that Asian Americans are seeing through rhetoric that is ultimately racist.

“It didn’t escape people that some of the people … who were promoting racial preferences were some of the most racist people out there,” she said.

Lenny McAllister, chief executive officer of the Pennsylvania Coalition of Public Charter Schools and senior fellow at the Commonwealth Foundation, said that voting in 2020 for African Americans became more about policy, and less about personality.

“African-American voters started making choices on policies,” McAllister said. “They started looking and saying, ‘Oh, my local public schools closed. And what options do my kids have to have continuity of education?’

Black voters have long voted overwhelmingly for Democrats, but in the Nov. 3 presidential election, Trump received 8 percent of the black vote (12% among black men), which is roughly a 2 percentage-point increase over his 2016 figures, according to AP VoteCast.

But McAllister cautioned that conservatives have their work cut out for them if they hope to engage more of the African-American population.

This is a time to reinvigorate our efforts in regards to tweaking how we articulate our proposals and making sure that we have the partnerships in place, both the traditional ones and the American constituencies that we’re going to be dealing with to ensure that people get the solutions that they need.

Canseco said the result is that minorities are more fully embracing what it means to be American.

“Going forward, I think that what you’ve got is an awakening of a population that was otherwise somewhat controlled—even though, I don’t mean to sound insulting—being told that one side is just a lot meaner and not as kind as another.

“And I see the … idea being that, they are now beginning to embrace more fully of their Americanism,” he said.