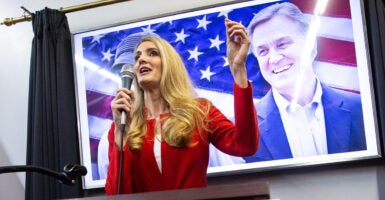 Sens. Kelly Loeffler and David Perdue, both R-Ga., have introduced a bill that would create a panel to study election integrity. Pictured: Loeffler speaks Nov. 11 in Marietta, Georgia, with Perdue on the screen behind her. (Photo: Jessica McGowan/Getty Images)

Policy experts and political leaders agree that election integrity is one of the most important issues facing the nation.

To that end, Sens. David Perdue and Kelly Loeffler, both R-Ga., introduced legislation Nov. 12 to establish a bipartisan advisory commission to “analyze the integrity and the administration” of the 2020 general election for president and other federal offices.

The 2020 election revealed that “serious oversight of the administering of our nation’s elections is long overdue,” Loeffler said in a statement Thursday, adding that the proposed commission would report to Congress with “recommendations to strengthen election integrity going forward.”

Perdue and Loeffler face challenges in runoff elections Jan. 5 from challengers Jon Ossoff and Raphael Warnock, respectively, that will determine which party controls the Senate.

The proposed 18-member commission would not be the first bipartisan effort to examine voting irregularities in U.S. elections and recommend what to do about them.

In the wake of the hotly contested 2000 presidential election between then-Vice President Al Gore and then-Texas Gov. George W. Bush, as well as another close contest in 2004, officials empaneled a Commission on Federal Election Reform.

Dubbed the Carter-Baker commission, it was co-chaired by former President Jimmy Carter, a Democrat, and former Secretary of State James Baker, a Republican. It addressed issues such as ballot harvesting and removing the names of dead voters from the registration rolls.

The Carter-Baker commission completed its report in 2005 with 87 recommendations for how to ensure election integrity. The report determined that mail-in votes “remain the largest source of potential voter fraud.”

The survival of the nation’s democratic republic depends upon “Americans’ belief that their vote counts and their continued faith in the fairness and security of our electoral process,” said Hans von Spakovsky, a senior legal fellow at The Heritage Foundation who oversees the think tank’s Election Law Reform Initiative.

The SAFE Votes Act would require Senate Majority Leader Mitch McConnell, R-Ky., to appoint nine of the commission’s members, one of whom would serve as chairperson. House Speaker Nancy Pelosi, D-Calif., would appoint the other nine, including a co-chair.

Appointed members must be “geographically balanced and shall include representatives of federal, state, and local governments and of the legal, cybersecurity, and election administration and technology communities,” according to the legislation.

If the bill is passed and signed into law, McConnell and Pelosi would have 90 days to make their appointments.

The 18 commission members would have a little less than a year to produce recommendations and a list of best election practices “to improve the security, integrity, and administration of federal elections,” the bill states.

The panel also would be tasked with making best-practices recommendations for state and local elections, specifically how to ensure free and fair elections amid the coronavirus pandemic or other national emergencies.

The introduction of the SAFE Votes Act comes amid widespread concerns over the integrity of the 2020 election and increased mail-in voting imposed during the COVID-19 pandemic.

Poll watchers in Philadelphia report that they were not allowed to observe the count of thousands of mail-in votes.

In Nevada, the Trump campaign argues that more than 3,000 nonresidents voted. It also alleges some in-person voters in Arizona had their votes unlawfully rejected.

Many Americans have serious questions about how the 2020 election was administered, and they deserve answers. We need a clear picture of where things went wrong and how we can fix it going forward.

Throughout history, Americans have made incredible sacrifices to obtain the right to vote and defend the security of our elections, von Spakovsky said. Americans owe it to these men and women to not “disregard their sacrifice or squander their precious gift to us.”