Justices Hint That Obamacare May Survive Another Legal Challenge 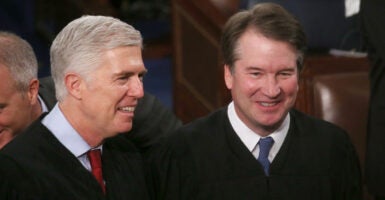 “It does seem fairly clear that the proper remedy would be to sever the mandate provision and leave the rest of the law in place,” Justice Brett Kavanaugh, pictured with Justice Neil Gorsuch during the State of the Union in February, said during arguments. (Photo: Mario Tama/Getty Images)

Most of the Affordable Care Act appeared likely to survive yet another legal challenge as five justices indicated that they were not inclined to strike down the law.

The court on Tuesday heard Texas v. California, a suit brought by multiple Republican attorneys general that argues that the individual mandate, a signature part of the health care law, is unconstitutional and that the entire law must be struck down as a result.

At least five justices, however, seemingly said that even if the mandate is found to be unconstitutional, it can likely be separated from the rest of the law.

“It does seem fairly clear that the proper remedy would be to sever the mandate provision and leave the rest of the law in place,” Justice Brett Kavanaugh said during arguments.

Though the mandate originally imposed a fine on those who opted out of receiving insurance, the fine was lowered to zero in the 2017 Tax Cuts and Jobs Act, rendering it largely unenforceable. This was echoed by Chief Justice John Roberts, who said that “Congress left the rest of the law intact when it lowered the penalty to zero.”

Texas v. California is the third time the Affordable Care Act has appeared before the Supreme Court. In 2012, the court upheld the individual mandate as a tax, with Roberts writing the majority opinion, and in 2015 the court ruled that the federal government could provide tax subsidies to facilitate lower-income Americans in buying health insurance.

Greater speculation has surrounded Texas v. California because the Trump administration has supported the plaintiffs in their push to overturn the Affordable Care Act and because three new justices have joined the court since it last heard a case related to the law.

In addition to Kavanaugh, who was confirmed in October 2018, Justices Neil Gorsuch and Amy Coney Barrett joined the court in April 2017 and October 2020, respectively.

Editor’s note: “No matter what the Supreme Court decides, this case reminds us that Congress needs to return to health reform,” says Marie Fishpaw, director of domestic policy studies at The Heritage Foundation. “The misnamed Affordable Care Act resulted in higher costs, fewer choices, and more barriers between patients and doctors. “

“Congress needs to deliver reform that lowers costs, improves choices, and makes sure the sick can see the doctor of their choice,” Fishpaw adds. “A broad spectrum of conservatives have developed the Health Care Choices Proposal to do just that, and independent estimates show it will lower premiums, increase the number of people with private coverage, and increase access to care.“