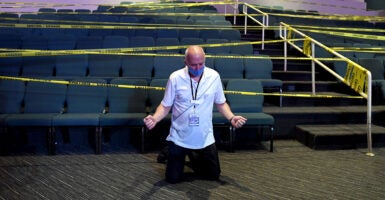 Usher Ron Worl kneels to pray on May 31 in front of seats cordoned off with caution tape at the International Church of Las Vegas, which held in-person services for the first time since March 15 because of the COVID-19 pandemic. (Photo: Ethan Miller/Getty Images)

During the course of the COVID-19 crisis, an ongoing, and very legitimate, national debate has continued about the wisdom of lockdowns.

These decisions reflect the values and priorities of those with power who are making them. In our increasingly secular society, this is posing enormous problems and challenges for religious freedom.

Earlier this year, Calvary Chapel Dayton Valley in Nevada failed in its attempt to get the Supreme Court to rein in Nevada Gov. Steve Sisolak’s order that arbitrarily clamps down more severely on churches than on gambling casinos.

Nevada’s policy holds that restaurants, bars, casinos, and gyms can operate at 50% capacity, while houses of worship are limited to a maximum of 50 people regardless of their capacity.

In a 5-4 vote, the court refused injunctive relief for Calvary Chapel.

Justice Brett Kavanaugh got to the heart of the matter in his dissent.

“Nevada’s rules,” wrote Kavanaugh, “reflect an implicit judgement that for-profit assemblies are important and religious gatherings are less so; that moneymaking is more important than faith during the pandemic.”

But rather than the fight being over, it is continuing and picking up steam.

The church, in its complaint and request for relief, noted that the mayor herself appeared and spoke at an outdoor gathering of “tens of thousands of people” in downtown Washington.

A federal district court judge in Colorado has just ruled in favor of two local churches who filed a suit challenging the state’s rules requiring masks and limiting the size of indoor gatherings. The judge found that the rules for religious institutions were more severe than for secular ones and, therefore, unconstitutional.

However, a lawsuit filed by Orthodox Jews and Catholics in New York against Gov. Andrew Cuomo’s restrictions on indoor gatherings was met with less success, as a federal district court judge ruled in favor of the state.

Lockdowns present a formidable test and challenge to the country. Our Constitution, with its Bill of Rights, was formulated with the idea that a legal fence could be built to protect individual freedom from arbitrary violations.

One of America’s Founding Fathers, John Adams, used the phrase “a government of laws, not of men” to capture the idea that we should aspire to limit arbitrary power given to men.

But a government-mandated lockdown is all about giving politicians enormous arbitrary power.

America was founded by those seeking religious freedom. Recall the famous sermon in 1630 by Puritan John Winthrop, founder of the Massachusetts Bay Colony, one of the nation’s first colonies.

“For we must consider,” said Winthrop, “that we shall be as a city upon a hill. The eyes of all people are upon us. So that if we shall deal falsely with our God in this work we have undertaken, and so cause Him to withdraw His present help from us, we shall be made a story and by-word through the world.”

But the religion, and the freedom to practice it, that was most important to Winthrop and many of the founders of this country is least important to many people with political power making lockdown decisions today.

According to a 2015 Pew Research Center report, 36% of Americans attend religious services weekly.

Legal challenges must continue everywhere constitutional protections for religious freedom and equal treatment are being violated.

And know that life and religious freedom are what’s on the ballot in the upcoming election.