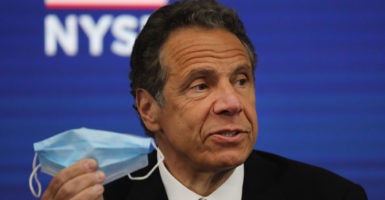 "If everything we do saves just one life, I'll be happy," New York Gov. Andrew Cuomo says in justifying his draconian coronavirus measures. Pictured: Cuomo holds his daily press briefing at the New York Stock Exchange on the first day that traders are allowed back onto the historic floor of the exchange May 26 in New York City. (Photo: Spencer Platt/Getty Images)

Is it important to have racial or sexual diversity in our fight against the COVID-19 pandemic?

Heather Mac Donald suggests that some think it might be in her City Journal article “Should Identity Politics Dictate Vaccine Research?”

The funding priorities of the National Institutes of Health and the Centers for Disease Control and Prevention suggest that they think diversity is an important input in making headway in the fight against the coronavirus.

On April 20, the National Institutes of Health and the Centers for Disease Control and Prevention announced the availability of grants to increase the “diversity” of biomedical research labs.

For example, academic virology researchers studying respiratory failure could receive hundreds of thousands more taxpayer dollars if they could find a woman or a minority to add to their project.

High school students and college students are eligible for the program even though they cannot contribute anything of value. No scientific justification for the new diversity hire is needed. The scientists must promise to mentor the new hire, which will take time away from their research with no offsetting gain.

Mac Donald has written another article on academic insanity, “The Therapeutic Campus,” which bears the subtitle: “Why are college students seeking mental-health services in record numbers?”

Many colleges have created safe spaces where students can be sheltered from reality and not have their feelings hurt by others exercising their free speech rights.

Yale University has created a safe space that would be the envy of most other universities. It has named it the Good Life Center.

Mac Donald says it has “a sandbox, essential oils, massage, and mental-health workshops,” and that “the center unites the most powerful forces in higher education today: the feminization of the university, therapeutic culture, identity politics, and the vast student-services bureaucracy.”

George Mason University has a Center for the Advancement of Well-Being, headed by a chief well-being officer.

At George Mason, well-being refers to social justice and “building a life of vitality, purpose, resilience, and engagement,” the center’s chief well-being officer told The Chronicle of Higher Education.

By the way, a George Mason University student can minor in well-being as a part of his college education.

New York Gov. Andrew Cuomo, in justifying his draconian coronavirus measures, said during a press conference: “This is about saving lives. If everything we do saves just one life, I’ll be happy.”

Cuomo knows that many Americans buy into such a seemingly caring statement that would be easily revealed as utter nonsense if one had just a modicum of economic knowledge. If one looked at only the benefits of an action, he would do anything because everything has a benefit.

Prudent decision-making requires one to compare benefits to costs.

For example, the National Highway Traffic Safety Administration estimates that in 2019, 36,120 people died in motor vehicle traffic crashes. Virtually all those lives could have been saved with a mandated 5 mph speed limit. Those saved lives are the benefit.

Fortunately, when we consider the costs and inconvenience of setting a 5 mph speed limit, we rightly conclude that saving those 36,120 lives isn’t worth it.

There are other news tidbits about politicians drunk with power that we Americans have given them.

Chicago Mayor Lori Lightfoot told city residents who disobeyed her stay-at-home order: “We will arrest you and we will take you to jail. Period. We’re not playing games.”

Meanwhile, in violation of her own stay-at-home order, Lightfoot slipped out and got her hair done. She explained her decision: “I take my personal hygiene very seriously.”

Ventura County, California, health director Dr. Robert Levin said that his department would forcibly remove COVID-19-infected people from their own homes and put them “into other kinds of housing that we have available.”

Facing stiff criticism, Levin later explained: “I either misspoke or it was misinterpreted. I’ll take the blame of having misspoke.”

The biggest casualty from the COVID-19 pandemic has nothing to do with the disease. It’s the power we’ve given to politicians and bureaucrats. The question is how we recover our freedoms.