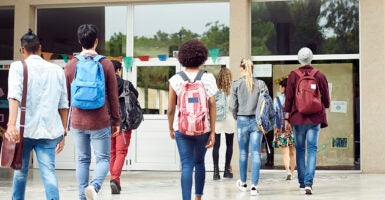 Many university professors do not buy into the gross academic deception that has become part and parcel of today's college education. (Photo: PhotoAlto/Frederic Cirou/Getty Images)

The ugliness that we have recently witnessed—including rioting, billions of dollars of property destruction, assaults, murders, and grossly stupid claims about our nation—has its origins on college campuses.

Two websites, College Reform and College Fix, report on the despicable teachings on college campuses across the nation. Let us look at some of it.

In response to Wisconsin Sen. Ron Johnson’s tweeting that he supports “citizen soldiers” in Kenosha, Wisconsin, Tressie McMillan Cottom, a black professor at the University of North Carolina-Chapel Hill’s School of Information and Library Science, declared that “they have deputized all white people to murder us.”

Jesse A. Goldberg, professor in the English department at Auburn University who teaches classes in African American literature, American literature, and composition, wrote a now-deleted post on Twitter, “F— every cop. Every single one.” Goldberg added, “The only ethical choice for any cop to make at this point is to refuse to do their job and quit.”

Eddie Glaude Jr., a Princeton University professor and chairman of the Department of African American Studies, said that when it comes to policing in America, “Black people still live under the slave codes.”

Glaude’s tweet came in response to news that Jacob Blake was handcuffed to his hospital bed after being shot by police in Kenosha, Wisconsin.

Glaude added: “Placing shackles around the feet of Jacob Blake amounted to a physical reminder that he was still, no matter the protests, a n—-r in the eyes of these policemen.”

New School professor Richard Wolff has called for the abolition of grades. He claims they are not only unfair to students, but also that they are a means of propping up capitalism, and as such, academia would be better off doing away with grading entirely.

He went on to say: “Grading takes up much of my time that could be better spent on teaching or otherwise directly interacting with students.” Administering grades to students has “little educational payoff” and “disrespects [students] as thinking people.”

She added, “I hope there are a lot of circles in academia having a serious conversation on how ‘academic freedom’ upholds white supremacy, racism, and prejudice.”

Findley also addressed past violent riots, writing that she was initially opposed to the 2015 Baltimore riots and was worried for the police officers but changed her mind.

She said: “I was scared for the fires, for the rioting, for the storefronts that would need to be rebuilt. That was my ‘protest differently,’ ‘all lives matter,’ and ‘blue lives matter’ moment. I was wrong and I was called out.”

In the wake of financial problems, many colleges are crying broke and want government bailouts, but they have enough money to hire costly diversity people.

Many university professors do not buy into the gross academic deception that has become part and parcel of today’s college education. They are too busy with their own research to get involved with campus politics.

But all is not lost. Taxpayers, parents, and donors who foot the bill can have a significant impact if they would stop being lazy and find out what is going on at our colleges. And, if they do not like what they see, they can snap their pocketbooks shut.