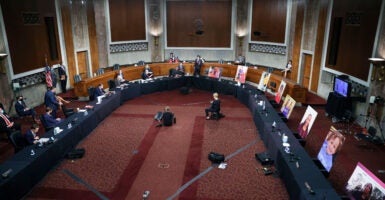 The 10 Democrats on the Senate Judiciary Committee boycotted Thursday's vote on the nomination of federal appeals court Judge Amy Coney Barrett to the Supreme Court. In their places, they placed portraits of people who they say rely on Obamacare. (Photo: Hannah McKay / CQ Roll Call / Agence France-Presse/ Getty Images)

That was what a crowd gathered in front of the Dirksen Senate Office Building chanted Thursday, hours after the Senate Judiciary Committee advanced Judge Amy Coney Barrett’s nomination to the Supreme Court.

The committee’s action sends the nomination to the full Senate, where it’s scheduled for a Monday vote.

“We are one step closer to filling that seat as the Senate Judiciary Committee voted Judge Barrett out of committee this morning, a major milestone and huge first step, and now she will head to the Senate floor in just a few days for her final confirmation vote,” Jessica Anderson, executive director of Heritage Action for America, The Heritage Foundation’s grassroots partner, told the crowd in kicking off the rally.

Signs read “Confirm Amy.” Another said, “The Dogma Lives Loudly in All of You”—a mocking reference to a critical comment by Sen. Dianne Feinstein, D-Calif., at Barrett’s 2017 confirmation hearing to serve as a judge on the 7th U.S. Circuit Court of Appeals.

The committee’s vote was a rare instance where it was both unanimous and by party line, as the 10 Democrats on the committee boycotted it. All 12 Republican senators voted to advance Barrett’s nomination.

Barrett’s confirmation hearing was held last week, including two days in which she took questions from senators on the committee.

“Thank you to Amy Coney Barrett for giving us the most incredible civics lesson that anyone could have. What is the role of a judge? And she just nailed it, hour after hour, day after day,” Carrie Severino, general counsel for the Judicial Crisis Network, a conservative legal group, said at the rally, adding:

As a mother and as a lawyer and a woman myself, I am so excited that Amy Coney Barrett is going to be the face and the role model that my daughters can look up to on the Supreme Court.

Barrett shows women can do it all, and yet she’s drawing strident opposition from self-proclaimed feminists, said Autumn Lindsey, a spokeswoman for the anti-abortion group Students for Life.

“We are going to win on Monday, but Democrats are not going to quit,” David McIntosh, president of the Club for Growth, a conservative advocacy group, told the crowd on Capitol Hill. “We will have to fight to preserve a free and independent judiciary, and not allow court-packing to turn the Supreme Court into just another political body.”

The grassroots support for Barrett is strong, said Casey Mattox, vice president for legal and judiciary strategy at Americans for Prosperity, another conservative advocacy group. He said that about 600,000 letters came into Senate offices in support of Barrett’s nomination.