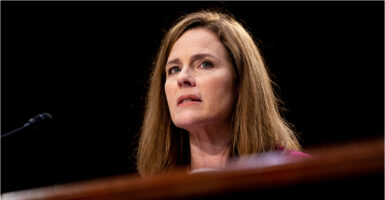 “The standing committee’s evaluation of Judge Barrett is based solely on the comprehensive, nonpartisan, non-ideological peer review of the nominee’s integrity, professional competence, and judicial temperament,” Roberts said.

The ABA lead evaluator added that through a comprehensive evaluation, the ABA concluded that “Judge Barrett has earned and enjoys an excellent reputation for integrity and outstanding character.”

“She is incredibly honest, forthright, and exactly who you think she is,” Roberts said, quoting accounts of Barrett. “Nothing about her is fake, she is good, decent, selfless, and sincere. She is an exemplar of living an integrative life in which her intellect, integrity, and compassion weave the different threads of her life together seamlessly.”

Roberts said descriptions of Barrett’s intellect include comments such as the following:

She is whip smart, highly productive, and well-prepared. A brilliant writer and thinker. She is quite pragmatic. Judge Barrett is an intellectual giant with people skills and engaging warmth, an amazing student, which came from a professor. Without exception the smartest student that I have taught.

“The myth is real, she is a staggering academic mind,” Roberts said, quoting another description of Barrett.

“Well-qualified” is the highest possible rating that the ABA will attach to a nominee. President Donald Trump’s first and second nominees to the Supreme Court, Justices Brett Kavanaugh and Neil Gorsuch, also received “well-qualified” scores.