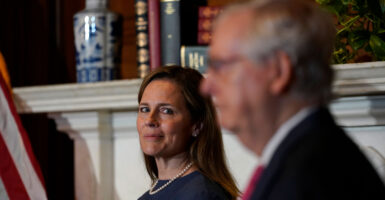 In her rulings on the 7th Circuit Court of Appeals, Judge Amy Coney Barrett has made it clear that she will protect Americans by enforcing the extensive guarantees of equal treatment contained in federal civil rights law—as intended by Congress.

That’s exactly what we should want (and expect) in a justice on the U.S. Supreme Court.

In nearly three years on the 7th Circuit, Barrett has participated in a number of important civil rights cases that illustrate her view of the law and her view of how a judge should interpret and enforce the law.

For example, in Kleber v CareFusion Corp., Barrett joined seven other judges to apply the clear text of the Age Discrimination in Employment Act. The issue was whether the prohibition against age discrimination applied only to employees of a company or also to job applicants.

The age-discrimination law specifically states that it is unlawful for an employer to “limit, segregate, or classify his employees (emphasis added) in any way” that would “adversely affect his status as an employee, because of such individual’s age.”

As the majority opinion joined by Barrett stated, the “plain language of [the law] makes clear that Congress, while protecting employees from disparate impact age discrimination, did not extend that same protection to outside job applicants.”

The court made its decision based on the statute’s “plain language … reinforced by the [law’s] broader structure and history.”

While one can argue about what the best public policy is on this issue and whether Congress should extend its protection to job applicants, Congress made the deliberate decision not to do so.

In our democratic system, that’s a decision to be made by the legislative branch—by Congress—not the courts.

Without Fear or Favor

Barrett’s rulings illustrate that she will follow the law, regardless of who the plaintiffs or defendants are. In Haynes v. Indiana University, Barrett joined an opinion by Judge Diane Sykes upholding the decision of Indiana University to deny tenure to a black professor. The professor claimed his denial of tenure was based on racial discrimination.

In fact, Indiana University has a multilayered tenure-evaluation process, and the professor received many negative reviews and criticisms, citing his low number of publications in high-quality journals, his unsatisfactory teaching and research, and other problems.

On the other hand, there are multiple cases where, in following the facts and the law, Barrett has ruled (or joined opinions) in favor of plaintiffs who brought discrimination claims.

In 2018, she wrote an opinion in Smith v. Rosebud Farm in favor of an African-American butcher who had been sexually and racially harassed and discriminated against by his supervisor and other employees at the small grocery store where he worked in Chicago.

Similarly, in 2019, in Stepp v. Covance Central Laboratory Services, Barrett joined a per curium opinion reversing the dismissal of a case that had been filed against a manufacturer of medical test kits.  The court held that the plaintiff, an African-American temporary employee, had produced sufficient evidence for a jury to conclude that he had not been made a permanent employee in retaliation for previous complaints he had made about racial and gender discrimination.

That same year, Barrett joined a per curium opinion reinstating a lawsuit that had been dismissed by a district court using too strict a standard. In Phillips v. Baxter, the panel concluded that the allegations by the plaintiff, a man of Antigua African ethnicity, against his former employer, the state of Illinois, “sufficed to state a claim of discrimination based on his ethnicity and national origin.”

Some critics of Barrett may bring up Equal Employment Opportunity Commission v. AutoZone Inc. In that case, a three-judge panel ruled against a discrimination claim by a black employee over a transfer out of a store located in a predominantly Hispanic neighborhood, because the transfer did not “adversely affect” him, as required under Title VII of the Civil Rights Act. The losing party asked the whole court to review the case en banc.

The majority of the court, including Barrett, voted not to review the case since the employee had suffered no “loss in pay, benefits, or job responsibilities” due to the transfer. Thus, his claim was not within the requirements of Title VII, because the law requires that an employment action must “adversely affect” an employee.

If the critics don’t like the result, they should petition Congress to change the law—not ask judges to rewrite it.

In Pursuit of Due Process

One of our most fundamental civil rights is the right to due process. The issue is whether it violates standards of fundamental fairness to convict someone of wrongdoing without disclosing to the accused what the evidence against him is or providing him with the opportunity to defend himself by presenting his own evidence and affording him the opportunity to confront those who have made the accusations against him.

While this is most important in criminal cases, it also arises in civil matters, including in instances in which a student is accused of having engaged in sexual harassment or sexual assault against another student.

Such a finding by a university tribunal can have dire, long-lasting consequences to a student’s personal and professional life and career.

Barrett obviously understands that.  In 2019, in Doe v. Purdue University, she wrote a unanimous opinion reinstating the claim of a student who was denied the most basic due process. He had been suspended by the university for a year and had his ROTC scholarship terminated (and his future naval career destroyed) following a university proceeding over a sexual-assault claim.

John Doe (not his real name) was accused of sexual assault by Jane Doe (not her real name). The university refused to allow the accused to review the results of the university’s inadequate and biased investigation, to introduce exculpatory evidence including texts from Jane Doe and information about her emotional instability, to question or cross-examine Jane Doe, or to present his own witnesses who could rebut the allegations.

Moreover, two of the three members of the academic tribunal admitted they had not even read the investigative report, which “suggested they decided that John was guilty based on the accusation rather than the evidence.”

Barrett was clearly taken aback that the members of the tribunal decided the charges “without ever speaking to [Jane] in person.”  In fact, Barrett noted that “they did not even receive a statement written by Jane herself, much less a sworn statement” describing what supposedly happened.

As Barrett wrote in her opinion, “Purdue’s process fell short of what even a high school must provide to a student facing a days-long suspension.”  To “satisfy the Due Process Clause, a hearing must be a real one, not a sham or pretense.”

She cautioned that while John Doe might not ultimately be able to prove his claims, he had raised sufficient questions about Purdue’s flawed process that he was entitled to proceed with his lawsuit.

All of these cases show that Barrett is a judge who focuses entirely on the facts and the law in a case, disregarding political and partisan ideological concerns over who the parties are or how third parties think the law should be twisted to achieve a particular desired outcome.

Furthermore, her proven track record of applying the text of civil rights statutes as written by Congress shows that she clearly believes what she said about the Supreme Court in 2016:

People should not look to the Supreme Court as a superlegislature. They should look at the Court as an institution that interprets our laws and protects the rule of law, but doesn’t try to impose policy preferences. That is the job of Congress and the president.

That’s exactly the kind of justice we need on the highest court in the land.