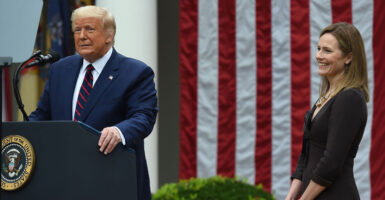 By now, we’re all familiar with President Donald Trump’s 2016 pledge to nominate someone from his list of potential Supreme Court nominees. In fact, the president updated his list last month, not long before the unexpected death of Justice Ruth Bader Ginsburg. True to his pledge, his nominee to ultimately fill the vacant seat, Amy Coney Barrett, was on this list.

As with the president’s previous two nominations, many individuals—voters and senators alike—were already familiar with Barrett because of her inclusion on Trump’s list.

In fact, the practice of releasing a list of potential Supreme Court nominees to the public is by no means common practice. In so doing, Trump is bringing an unprecedented level of transparency to the selection process.

Biden has given three reasons why he won’t release his own list: He says that putting someone’s name on the list could “influence that person’s decision-making as a judge,” that anyone on the list would be subject “to unrelenting political attacks,” and that he won’t make his choice based “on a partisan election campaign … [but instead] only after consulting Democrats and Republicans in the United States Senate.”

That of course has not stopped several liberal groups from floating their own choices for potential nominees. Most prominent among them is Demand Justice, a self-described “progressive movement fighting to restore the ideological balance and legitimacy of the federal courts by advocating for reform and vigorously opposing extreme nominees.”

This self-description is ironic on several levels, not the least of which is because Demand Justice itself advocates for extreme measures that undermine the legitimacy of the courts, such as “packing the Supreme Court”—or adding more seats in order to appoint sympathetic justices who will approve the president’s objectives.

As for opposing extreme nominees, take a look at who Demand Justice recommends. They are hardly middle-of-the-road non-ideologues.

Still, speaking more generally, is there anything inherently wrong with a president or presidential candidate releasing a list of potential nominees? Demand Justice doesn’t think so. Neither do we. So on that, we agree.

If anything, Trump’s use of a list to select Supreme Court nominees has brought an unprecedented level of transparency to a process that typically takes place behind closed doors far away from public view. Though some might disagree with us, we think that’s a good development.

In the future, we hope presidential candidates will continue to list their potential nominees to the Supreme Court. The nominees will be selected for lifetime appointments to our nation’s highest court, so more transparency is only a good thing.