Barrett’s Former Colleagues: ‘No One … Better Suited to Be on the Supreme Court’ 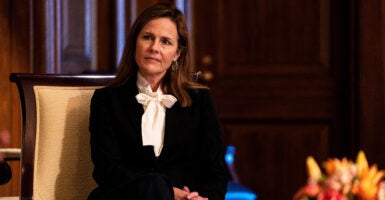 Federal appeals court Judge Amy Coney Barrett, nominated to the Supreme Court, confers with Sen. Josh Hawley, R-Mo. (not pictured) at the Capitol on Oct. 1. Barrett is meeting with senators ahead of her confirmation hearings, which are scheduled to begin on Oct. 12. (Photo: Demetrius Freeman/Getty Images)

Alexa Baltes has a unique perspective on Supreme Court nominee Judge Amy Coney Barrett, as both a former student of hers at Notre Dame Law School and as a law clerk for her on the 7th U.S. Circuit Court of Appeals.

“I mentioned her enthusiasm for principles over preference as a law professor. I got to see her turn theory into practice as a judge,” Baltes said during a virtual panel discussion of Barrett held by The Heritage Foundation.

“She was meticulous about taking herself out of decision-making. It didn’t matter what she wanted or what the public wanted. The only thing that mattered in her chamber—and she made very clear—was what the law required,” Baltes said.

Baltes clerked in 2018 and 2019 for Barrett, now President Donald Trump’s nominee for a vacant seat on the Supreme Court, and said that as a professor and judge, Barrett always challenged her students and clerks to defend their positions and question their assumptions.

“In the same way she used to challenge us students, she encouraged us clerks to challenge and push back on her reasoning,” Baltes said during the panel discussion Friday. “She just totally embodies the role of a judge as judge and not a policymaker.”

Laura Wolk, who attended the University of Notre Dame Law School from 2013 to 2016, was a student of Barrett’s in two classes.

Wolk, who is blind, recalled how Barrett made sure she had all the technology she needed to enable her to compete on a level playing field with other students.

“As a person with a disability, you hear this a lot. You hear a lot of people say, ‘Don’t worry. You can rely on me.’ Unfortunately, a lot of times that isn’t actually the case,” she said. “But when professor Barrett, who had no reason to owe me anything … but she did. When she told me she would take care of it, as someone who has experienced these barriers many, many times, I knew it was a rare circumstance.”

Wolk added that those who attack Barrett’s Catholic faith as a weakness are uninformed.

“I don’t think these people have ever met anyone that has practiced radical love the way professor Barrett has, because radical love makes you a bigger person. It expands your heart. It doesn’t constrict it,” she said. “And it makes you more capable of serving others, and loving others and being present to them. … I received the benefit of Amy Coney Barrett’s faith.”

She was clear that studying under Barrett was not easy, as other former students and clerks attested she constantly challenged them.

“[Barrett] did not tolerate soft ideas, and she did not tolerate sloppy reasoning. What she wanted from her students is that they would develop whatever jurisprudence, whatever philosophy, whatever position they decided to espouse, you had to come to class with good reasons for that decision and ready to debate with then-professor Barrett as she gave you the best counterargument against your position,” Wolk said, adding:

Judge Barrett never betrayed her own beliefs in the classroom. She never led her students. She never pushed them one way or the other. She acted as the paramount professor in the sense that her sole role was to expose her students to a variety of ideas from every side.

As a judge, Barrett heavily researched legal briefs to the cases well before the oral arguments, and carefully weighed the law, said John Adams, one of the first people to clerk for her on the 7th Circuit in 2017 and 2018.

“She approached cases the same way that either side could be right, and we would follow what the law required,” Adams said, adding:

She would dive right in. She would read all the briefs and then we would conference as law clerks, and we would discuss the case. Oftentimes, Judge Barrett would identify legal issues or wrinkles we had not even considered.

Adams said that’s the type of justice that should be on the Supreme Court, as someone who “knows all the doctrinal core issues” and “someone who will dive into the facts of a new issue or a new case before her.”

He noted that Barrett produced legal opinions “with a sense of decency” toward the parties involved.

“She also taught me a very important lesson that I engaged with as I continued to develop as an attorney in private practice,” Adams said. “She said that she would put herself in the shoes of the party that she was ruling against and consider how would that person perceive her decision.”

At Notre Dame Law School, O. Carter Snead said that he and other former colleagues of Barrett’s are happy for her nomination, but sad in another respect.

“We’re obviously delighted that she has been chosen by the president, because there is literally no one in America who is better suited to be on the Supreme Court than Judge Barrett,” said Snead, director of the de Nicola Center for Ethics and Culture at the school. “At the same time, we have some sadness at the prospect of losing her and her family to Washington, D.C.”

Snead said Barrett’s former colleagues are also concerned about how judicial confirmations have turned into a “no-holds-barred blood sport in our nation’s capital, which reflects our polarized politics.”

“One of our colleagues at Notre Dame put it this way: ‘Amy Barrett is the judge you would want to have on the court if you didn’t know which side of the lawsuit you were going to be on,’” Snead said.