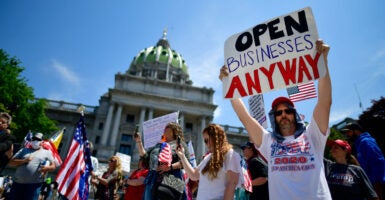 A federal judge on Sept. 14 struck down as unconstitutional the most significant portions of Pennsylvania Gov. Tom Wolf's COVID-19 restrictions on public gatherings and business shutdown orders. Pictured: Demonstrators rally outside the Pennsylvania Capitol building in Harrisburg on May 25, protesting Wolf's continued closure of businesses due to the coronavirus pandemic. (Photo: Mark Makela/Getty Images)

Judge William Stickman IV’s development of the factual record, and his journeyman approach to the opinion, is a model for other judges to follow.

Stickman’s opinion is a must-read, as he exposed the arbitrary and capricious nature of Pennsylvania Gov. Tom Wolf’s power grab, which has affected the lives of every Pennsylvanian, and he distilled his reasoning with crystal clarity.

That was no easy feat because, as Stickman noted throughout his opinion, the capacious nature of the government’s actions is a first in our country’s history.

As such, the judge had to apply constitutional law and precedent to a novel application of executive power.

Given this novelty, it’s unclear whether or how much of Stickman’s order will be upheld on appeal, but even if it’s reversed, he has provided Pennsylvanians a valuable service by reminding Wolf that, even in unprecedented times, laws must be neutral, fair, and not arbitrary.

Wolf’s assorted COVID-19 restrictions failed all of those requirements.

The plaintiffs in the case were a group of Pennsylvania counties, politicians, and businesses, all of whom were adversely affected by the draconian COVID-19 restriction orders of Wolf and state Secretary of Health Rachel Levine.

The plaintiffs argued that Pennsylvania’s numerical limits on gatherings—25 people for indoor gatherings, 250 for outdoor gatherings, and up to 75% of maximum occupancy for certain businesses or exempted events—violated the First Amendment.

Stickman agreed on all counts, but dismissed the counties from the case because they are not persons and, therefore, they lacked constitutional rights.

The first question Stickman had to answer was what level of scrutiny he should apply to the plaintiffs’ claims. The Supreme Court has set out several “tiers of scrutiny” that govern how deferential courts should be when reviewing government actions.

The defendants, Wolf and Levine, argued that their orders should be exempt from that whole framework. Relying on a 115-year-old case, Jacobson v. Massachusetts, that predates the creation of the tiers of scrutiny, they argued that they should have essentially free rein to combat the COVID-19 pandemic as they see fit.

In essence, they argued that due to the fact that this pandemic was an unprecedented emergency, their actions should not be subject to any legal scrutiny—or, at most, highly deferential judicial scrutiny.

Stickman disagreed. He noted that even that 1905 case “did not hold that deference is limitless.” What’s more, as Supreme Court Justice Samuel Alito explained in a concurring opinion from this year, “a public health emergency does not give Governors and other public officials carte blanche to disregard the Constitution for as long as the medical problem persists.”

Reviewing the record, which included voluminous testimony from Pennsylvania officials, Stickman found that the governor and his aides view their COVID-19 restrictions as the “new normal.” To simply give them unfettered discretion forever, therefore, “risks subordinating the guarantees of the Constitution, guarantees which are the patrimony of every citizen, to the immediate need for an expedient solution.”

That risk is ever higher, Stickman explained, where—as in Pennsylvania—the COVID-19 restrictions were implemented by executive fiat outside the normal legislative or administrative processes.

The plain language of the order made no exceptions for protests or other expressive gatherings. The judge dryly noted that the governor participated in one protest that violated his own statewide order and, furthermore, did not comply with mask-wearing or social distancing requirements.

Wolf and Levine countered that they had made certain comments—outside of the order—saying that protests were permitted. That didn’t fly, explained Stickman, because “[d]efendants cannot govern by comment … they are bound by the language of their orders.”

The orders are not, he explained, reciting the legal standard, “narrowly tailored.” For one thing, capping expressive gatherings at a fixed number—25 for indoors, 250 for outdoors—while allowing commercial gatherings as a percentage of occupancy “creates a topsy-turvy world, where Plaintiffs are more restricted in areas traditionally protected by the First Amendment than in areas which usually receive far less, if any, protection.”

The judge noted that an auto show and flea market could host 20,000 people—an exception granted by the government—while a protest was capped at 250.

What’s more, Wolf and Levine failed to offer any evidence that the specific numbers chosen were anything other than purely arbitrary.

The occupancy limits did not account for the varying needs of Pennsylvania’s 67 counties, some of which are dense and urban, while others are sparse and rural. Accordingly, the occupancy limit violated the First Amendment.

The governor’s stay-at-home order, which severely restricted when and for what purposes Pennsylvanians could leave their homes, violated the Due Process Clause.

Stickman noted at the outset that this is not a quarantine, which has been used in past pandemics. Rather, it’s a broad “population lockdown” that has “never been used in response to any other disease in our history.” Even during the much deadlier Spanish flu 100 years ago, “nothing remotely approximating lockdowns were imposed.”

Again, applying the relevant legal framework, Stickman found that the lockdown violated the Constitution because it dramatically restricts the freedom of movement for an indefinite period of time, carves out arbitrary exceptions, and is much more draconian than other tools recommended by the federal Centers for Disease Control and Prevention.

Central to that conclusion was the protection that these clauses afford against arbitrary and irrational rules.

After scouring the factual record, Stickman found that Pennsylvania’s labeling of some businesses “life-sustaining,” and others not, was purely arbitrary.

The team tasked by Wolf to make those determinations had no set policy for doing so and never even bothered to define the terms “life-sustaining” and “non-life-sustaining.” It met in secret, kept no notes, never held recorded votes on key decisions, and none of the secret group—all of whom worked for the governor’s staff—was a doctor or public health official.

That led to absurd results, such as where the government shuttered mom-and-pop hardware stores, like R.W. McDonald & Sons, while allowing large ones, like Lowes and Home Depot, to stay open. In other words, the business shutdown order amounted to “an arbitrary, ad hoc, process” with the government, noted the judge, simply “picking winners and losers,” something the Constitution plainly forbids.

The factual record developed by the judge will be difficult to explain on appeal.

Wolf is challenging Stickman’s comprehensive 66-page decision, but regardless of whether it’s upheld or reversed, Stickman has done the people of Pennsylvania a great service and provided the rest of us an important reminder: Even in emergencies—or, to our minds, especially in emergencies—the Constitution still applies, and government officials must follow it.