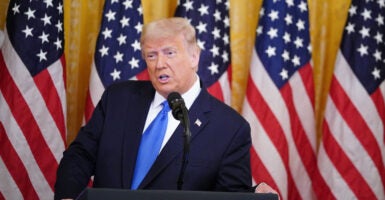 “This is our sacrosanct moral duty," President Donald Trump, pictured Wednesday in the East Room of the White House, says of his intention to sign an executive order protecting infants who survive abortion. (Photo: Mandel Ngan/AFP/Getty Images)

President Donald Trump announced Wednesday that he will sign an executive order to ensure that babies who are born alive receive proper medical care.

Although the president didn’t go into detail about what the order would do, proposals earlier this year in the House and Senate would require health care professionals to treat a baby born alive after an attempted abortion the same as medical professionals would treat any other newborn.

“I will always defend the sacred right to life,” Trump said in remarks at the 16th annual National Catholic Prayer Breakfast, held virtually this year.

“Today I am announcing that I will be signing the ‘born alive’ executive order to ensure that all precious babies born alive—no matter their circumstances—receive the medical care that they deserve,” the president said. “This is our sacrosanct moral duty.”

In 2002, President George W. Bush signed into law a bill extending legal protection to infants born alive at any stage of development, including after an abortion. The law, however, lacked enforcement provisions.

Legislation called the Born-Alive Abortion Survivors Protection Act, considered in 2019 and again in 2020, would include criminal consequences for health care providers who violate the 2002 law. It also would require that proper medical care be given by the health care practitioner present if an infant is born alive.

The proposal emerged after Virginia Gov. Ralph Northam, a Democrat, suggested in a live radio interview that in some circumstances, mothers and doctors should be able to deny medical care to newborns who survive an abortion.

A president’s executive order cannot go as far as legislation.

The “born alive” bill, if passed, would mandate that a child born alive in an abortion clinic be transported to a hospital; require health care workers to report violations; impose penalties of up to five years in prison for intentionally killing a newborn; and grant the mother immunity from prosecution and cause of action against the abortionist if the child wasn’t cared for.

After Trump’s announcement Wednesday morning, March for Life President Jeanne Mancini said the president had “stepped up for life.”

“His actions today provide necessary legal protections for some of the most vulnerable in society: survivors of failed abortions,” Mancini said in a written statement, adding:

These steps had to be taken because some Democrats in the Senate promised to block legislation that mandates basic medical care for children who survive an abortion—an extremist view shared by vice presidential candidate Kamala Harris.

While any abortion is one too many, the reality is that Americans overwhelmingly want to see greater protections for the most vulnerable. These protections are a strong step in the right direction and the Senate should move quickly to codify the president’s executive order and pass Sen. Ben Sasse’s (R-Neb.) Born-Alive Abortion Survivors Protection Act.

During his remarks at the prayer breakfast, Trump said, “We are also increasing federal funding for the neonatal research to ensure that every child has the very best chance to thrive and to grow.”

The president noted that he grew up next to a Catholic church in Queens, New York, saying:  “These are amazing people, these are great, great people.”

“Catholic schools give many underserved children the change to reach their God-given potential,” he said, adding: “Our nation is strong because of Catholics and all people of faith. We believe in the joy of family, the blessings of freedom, and the dignity of work, and the eternal truth that every child, born and unborn, is made in the holy image of God.”