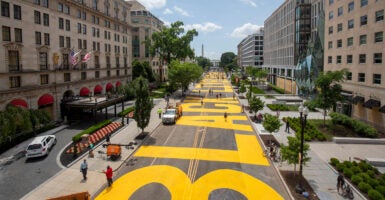 In June, D.C. Mayor Muriel Bowser ordered a street near the White House to be named “Black Lives Matter Plaza.” Its location was chosen as a not-so-subtle and cheap political jab at President Donald Trump. (Photo: Tasos Katopodis/Getty Images) 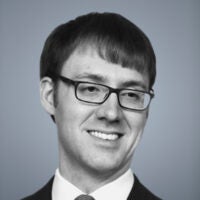 A year ago, she advocated for criminal justice measures that even The Washington Post’s editorial board decried as having “gone too far,” a situation where “common sense may be losing out to enthusiasm for reform.”

But this past week, she attempted to pass herself off as just the opposite, a law-and-order mayor stymied by an uncooperative U.S. Attorney’s Office for the District of Columbia, which prosecutes most local crime in D.C.

Nothing could be further from the truth. But her efforts make sense in crass political terms. Surely she doesn’t want to take the blame for the rampant lawlessness and violence in the wake of her actions.

For instance, this past June, Bowser ordered a street near the White House to be named “Black Lives Matter Plaza,” ostensibly to honor George Floyd who was killed by a police officer a month earlier in Minneapolis. Volunteers painted the name of the new plaza on the street in huge yellow letters.

It wasn’t a coincidence that the renamed street was close to the White House—its location was chosen as a not-so-subtle and cheap political jab at President Donald Trump, because he sent additional federal resources into the District to protect federal buildings and statues from further destruction (which highlights the continued need for federal authorities to control their own security at the seat of the federal government).

It apparently never occurred to Bowser that in renaming a street after Black Lives Matter, a radical, violent, Marxist-inspired group, it would act as a dog whistle for violent radicals around the country and result in more criminals flocking to D.C. to riot, burn, loot, assault police officers, and more. But that is exactly what happened, and has been happening all summer.

Now, Bowser seeks to shift the blame. In a stunning display of disingenuousness, she accused the U.S. Attorney’s Office of being “reluctant to prosecute 68 outstanding arrest warrants,” related to the ongoing violent demonstrations in the city.

She went further in her weekly news conference, even suggesting that the office—headed by a Trump-appointed prosecutor—is ostensibly responsible for causing the ongoing violence. She followed it up with a formal letter casting aspersions on the office for failing to prosecute violent rioters.

That takes a lot of chutzpah.

Fortunately, the local prosecutor’s office was having none of it, publicly rebuking Bowser in a news release, saying her comments were “patently false and serve[] no purpose other than to pass blame and foster innuendo.”

The head of that office followed up with a letter clarifying that his office has charged more cases related to the ongoing violence than any other U.S. Attorney’s office in the country. He also made it clear that “facts and evidence will dictate criminal charges, not political leveraging or personal agenda.”

But let’s unpack this saga, as it is a microcosm of what is happening in large cities across the country run by liberal mayors.

This is becoming a regular phenomenon: Liberal mayors fail to effectively deal with violence in their streets by hamstringing their police departments and praising the “peaceful protesters.”

From Seattle to Portland to Kenosha to Chicago to D.C., violent vandals are destroying property, assaulting police officers, burning cars, breaking into stores, looting, and causing chaos. Small businesses are shuttered, and residents near the mayhem are fleeing the city.

The actions and words of these mayors are anti-police, anti-prosecutor, and anti-law and order. A fully functioning police force in any of those cities could have more effectively quelled the violence if they had the backing of their liberal mayoral masters.

Instead, these mayors, who act like modern day Iagos, purposefully undermine their police for political gain.

This political ploy, however, has seemingly run out of political steam, and is coming back to bite them in the polls. It turns out Americans, including liberal elites who live in big liberal cities, support law and order, and don’t support defunding police departments when their homes, their lives, and their safety are all on the line.

It probably never occurred to Bowser that the D.C. U.S. Attorney’s Office, which rarely pushes back on local judges or politicians, would rebut her blame-shifting statement with facts, but they did.

In their press release, they laid out the facts:

Over the past year, the United States Attorney’s Office for the District of Columbia has charged more than 9,500 cases, which include more than 2,500 felony cases. Specifically, with regard to the spike in protest-related violence throughout the District this summer, the Office aggressively charged 121 criminal cases from May 28, 2020 to August 1, 2020.

These cases included assault and battery on local police officers and federal agents, arson cases, and the destruction of both private and government property.

Most recently, over this past weekend alone, the Office brought criminal charges against five individuals linked to protest-related violence – two of those cases involved assaults on police officers.

Since the protests began, this Office has never turned down a single case for prosecution in which there was sufficient evidence to support probable cause.

Bowser owes the acting U.S. attorney for D.C., Michael Sherwin, an apology. Better yet, she might consider publicly denouncing Black Lives Matter itself, ordering Black Lives Matter Plaza to be changed back to its old name, and supporting law enforcement and the prosecutors who keep D.C. residents safe.

At a minimum, she should stop her disingenuous, blame-shifting tactics.