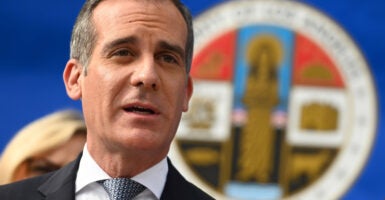 Los Angeles Mayor Eric Garcetti, seen here at a March 4 news conference explaining a state of emergency for COVID-19, has since threatened to cut off the water and power service to homes, businesses, and other venues that host large gatherings. (Photo: Robyn Beck/Agence France-Presse/Getty Images)

Bob Wickers is vice president of operations and California director at the Freedom Foundation.

The COVID-19 pandemic has brought out political power trips like America has never seen before.

Governors and mayors have seized “emergency powers” that effectively shut down our economic engine and social culture.

Never before had Americans seen the day when they would be told they couldn’t open for business, attend worship services, hold weddings or funerals, or send their children back to school.

Americans never anticipated they’d be forced to wear facial coverings if they so much as left their homes.

The continued crisis has sufficiently emboldened tyrants-in-waiting to the point that Los Angeles Mayor Eric Garcetti cut off the water and power to a home that hosted a large gathering—and threatened to do the same to businesses that defy his “social distancing” edict.

How does that help anyone?

Many of these edicts are obvious political power grabs in order to keep people uncomfortable and inconvenienced, in hopes of affecting the November elections, but they will have destructive consequences we haven’t yet fully realized and can’t even anticipate.

One political force to be reckoned with in California is even willing to sacrifice the futures of younger generations; namely, the teachers unions.

Health experts across the country have urged school districts to reopen in-person education for the well-being of America’s schoolchildren, but to no avail in the Los Angeles area.

The Unified Teachers of Los Angeles has released a list of demands the union says must be met before the teachers will go back to work, and many of the demands have nothing to do with health and safety.

The teachers union is not simply demanding gallons of hand sanitizer and masks for everyone on campus. Labor leaders are not merely requesting plexiglass barricades around their workspaces to protect them from students who may be carrying COVID-19. Those suggestions could be discussed.

No, the teachers union is refusing to go back to the classrooms unless politicians abolish charter and private schools, eliminate unpaid rent evictions, remove school resource officers, and defund law enforcement.

It doesn’t matter to the union’s leaders that when kids can’t go to school, parents either can’t go to work or must make other child care arrangements—often at increased cost to already struggling families.

Students fall behind in their lessons and extracurricular activities, affecting grade point averages and skill development needed for college or post-high school careers.

Depression and anxiety rates among K-12 students is increasing, as is stress on families.

The teachers union wants to draw out the pain and inconvenience on millions for political gain, and too many area political leaders are willing to comply because they, too, see a political advantage to staying shut down and shut in.

Why are we paying property taxes if the schools those taxes fund remain locked and empty, and if parents have to take on the primary role of educating their children?

By comparison, New York Gov. Andrew Cuomo has announced that his state’s public schools can reopen for in-person education. He needs the schools to reopen because it’s one of the few things that may keep his tax base from collapsing entirely.

America is six months into the pandemic, and many companies are realizing their employees can work remotely. Why pay exorbitant rent for New York City office space when people have effectively learned to work from home? Why should people pay sky-high property taxes when they can do their jobs in a more affordable community?

Cuomo has begun begging his wealthy constituents to return to New York, even offering to take them out for a drink or cook them dinner.

While Cuomo’s decision to reopen schools is also largely political, he’s at least letting New York families return to some semblance of normalcy.

My organization, the Freedom Foundation, works tirelessly to free teachers and other government employees from union bondage. In the two short years since the U.S. Supreme Court handed down its landmark decision in Janus v AFSCME—giving government employees the constitutional right to opt out of union membership—we have helped more than 8,500 teachers leave their unions.

Teachers unions don’t care about teachers. They only care about collecting dues from teachers’ paychecks. That’s why they fight teachers who want to leave the union.

The leaders of the Unified Teachers of Los Angeles are not thinking about the children. They’re holding our children hostage, and Californians should demand that it stop.