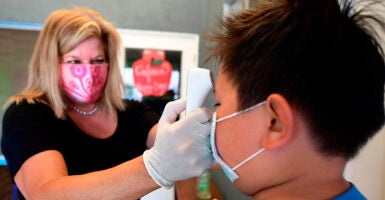 Parents looking for a national consensus on whether schools should open in the fall won’t find one. But that’s OK. We don’t need one.

As soon as President Donald Trump announced his support for reopening schools this fall, teacher unions said he was “brazenly making these decisions.” So much for consensus.

And this despite the fact that both proclamations said students should be kept safe, emphasized Centers for Disease Control and Prevention guidelines on reopening (speakers on a White House panel cited no fewer than eight CDC reports, while unions called the documents “conflicting guidance”), and claimed to have the nation’s best interests in mind. Well.

Luckily, many state officials and school leaders already had moved on.

In April, Montana Gov. Steve Bullock, a Democrat, said that schools could hold classes in-person immediately, but left the decision to local educators. In Idaho, closures varied by school district, but some school leaders had students back in class by May.

Even if relatively few schools thus far have decided to have students return to the classrooms, that fact that some states have done so should change parents’ question from if schools will open in the fall to how quickly the process can happen.

“The CDC has issued guidance,” Vice President Mike Pence said at the White House event, “but that guidance is meant to supplement and not replace state, local, territorial, or tribal guidance.”

What may be “conflicting guidance” to unions is better described as “federalism.” Fifty states, 50 different pandemics, 50 laboratories of democracy.

That’s the way it should be. Supreme Court Justice Louis Brandeis coined the “laboratory” phrase, prefacing it by saying, “To stay experimentation in things social and economic is a grave responsibility.”

After the wild ride of sudden school closures in March, uneven attempts at online instruction through the spring, and a school year that seemed to have no official end date, polls showed more parents were considering educating their children at home.

For those wondering if the 59% of respondents in a USA Today/Ipsos poll who said they may homeschool now really meant it, a recent headline weeks before school starts from North Carolina’s North State Journal read: “Homeschool requests overload state government website.”

Those not ready to homeschool will find it difficult, if not impossible, to return to work if schools are closed. Montana is not Virginia, which is not New York City. And parents ready to homeschool in Greensboro, North Carolina, may be thinking differently than a family in Charlotte.

Parents should be wary of press releases with advice on education from public or private national groups that use words such as “comprehensive,” “nation’s schools,” or even “all.”

The Trump administration said that schools may lose federal money if they stay closed. Such a move likely would be challenged in court.

But one problematic aspect of this threat is that it keeps the debate over who should be making decisions for the “nation’s schools”—again, beware the phrase—at the national level, a tussle between the federal government and nationally-focused special interest groups.

A more effective talking point for the administration would be to encourage the laboratories.

For example: In areas where schools are closed, state lawmakers could give parents and students who wish to opt out of those schools the students’ per-student spending amount to use for homeschooling resources, private school tuition, tutors, and more. Or erase district boundaries and allow students to choose a traditional school other than his or her assigned school.

The National Education Association and American Federation of Teachers, the nation’s largest teacher unions, will howl at the suggestions, but they should be loath to take the matter to court again.

The U.S. Supreme Court recently ruled that Montana could not prevent families from choosing a religious school when students use K-12 private school scholarships created by state law.

Unions regularly cite provisions in state constitutions that are rooted in religious bigotry when the groups sue to block such opportunities, but the high court called precisely this language discriminatory in Espinoza v. Montana Department of Revenue, weakening the union’s position in 37 other U.S. states with similar provisions.

The fight now has advanced to defending scholarships to religious private schools in Maine.

Washington should not force schools to reopen. But national officials can remind state lawmakers and parents there are alternatives. Short of a consensus on opening schools in August, that is the best news for everyone.