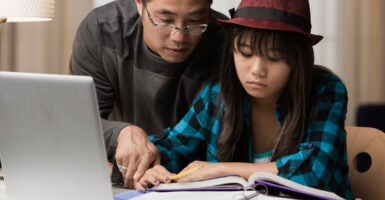 Without court intervention, their children “will be denied the opportunity to compete for admission to ... magnet middle school programs on an equal footing with other applicants," Asian American parents say in their lawsuit in Montgomery County, Maryland. (Photo illustration: Hill Street Studios/Getty Images)

A group of parents filed a lawsuit Tuesday alleging that the public school system in Montgomery County, Maryland, discriminates against Asian American students in the admissions process for gifted and talented programs.

The group of mostly Asian American parents, organized as the Association for Education Fairness, is asking a federal court in Maryland to find that changes to the admissions process violate the Constitution’s equal protection clause and to prohibit continued enforcement of the changes.

After the parents had petitioned the Montgomery County Board of Education for several years, Pacific Legal Foundation filed the suit on their behalf against both the school board and Superintendent Jack Smith in U.S. District Court for the District of Maryland.

“If you have a neutral and fair admissions process, we shouldn’t care what the racial outcome is. And we shouldn’t be manipulating it to get to the point where we want a racial outcome,” Chris Kieser, one of the foundation’s lawyers on the case, told The Daily Signal on Wednesday morning.

Without court intervention, the parents say in the suit, their children “will be denied the opportunity to compete for admission to … magnet middle school programs on an equal footing with other applicants on the basis of their race.”

A spokesman for Montgomery County Public Schools acknowledged The Daily Signal’s request for comment on the suit Tuesday evening, but had not responded at publication time.

Montgomery County is an affluent, Democrat-run jurisdiction just outside the District of Columbia.

In 2017, Montgomery’s school system implemented major changes in the admissions process on the recommendation of an education consultancy called Metis Associates.

Administrators replaced the old process of admissions, which was based on a combination of cognitive test scores, grades, and teacher recommendations, with a new “field test” that automatically screens a student’s qualifications using a secret formula that takes into account his or her “peer group.”

MCPS so far has refused to release the full data on the variables used in the field test to determine admissions.

In the one-year span between 2017 and 2018, the percentage of Asian Americans participating in several gifted and talented programs in MCPS middle schools dropped.

In each of the other gifted and talented programs that conducted the field test, the results were the same across the board: a steep decline in the proportion of Asian students accepted, while the numbers rose for all three other races.

“Now, the county is entitled to and should take steps to help boost the opportunity of those who are underperforming to attend the magnet program,” said Kieser, the Pacific Legal Foundation lawyer, adding:

But it’s one thing to increase opportunity by offering test prep or increasing programs in the low-performing schools. It’s another thing to change the admissions process to prioritize low performers because you don’t like the racial balance of the school.

Eva Guo, one of the leaders of the Association for Education Fairness, said she suspects implicit racial balancing is going on.

“The Board of Education and Superintendent Jack Smith have made no secret of the fact that the changes they have implemented to the magnet program admissions policy … are intended to reduce the proportion of Asian American students enrolled in these programs,” Guo said Monday in an email to the Daily Signal, “because they thought Asian Americans are ‘overrepresented’ in the programs.”

Montgomery County Public Schools has made no secret of desiring to increase the percentage of black and Hispanic students in admissions for gifted and talented programs.

“We’re not doing a very good job of bringing in African American and Latino students,” school board member Patricia O’ Neill said about the gifted and talented programs in 2016.

As the battles in school board meetings grew more tense, however, board members, who are elected without party affiliation, appeared to show hostility toward Asian American rights and dreams.

“In our country, we have experienced decades of horrors and atrocities against our African American families,” she said, seeming to imply that the value of the African American narrative in this educational context outweighs the Asian American one.

Parents involved in the Association for Education Fairness say the school board’s rhetoric grew more confrontational and dismissive of Asian American concerns about the fairness of allowing the school district to exercise more expansive control over admissions in the name of race.

In 2016, then-school board member Chris Barclay commented to the local Bethesda Beat newspaper:

In this region, [which] unfortunately is very addicted to power and ranking, there is a reality of folks wanting to be on top or have more than others. … How are we going to have this conversation so it’s not just again the usual suspects that end up knowing everything and then end up being able to leverage their knowledge to being able to get what they want for their children.

After the school board made the changes in the admissions process, the school system turned down Asian kids in for the gifted and talented program in middle schools despite their scoring as high as the 99th percentile in the tests administered for admissions.

The Asian American parents’ suit alleges this is due to the school system’s stated principle of considering a person’s score “within the context of his or her peer group.”

This was another way of saying that the school system applied local norms to its schools, pledging to select similar numbers of students from each school despite the vast differences in academic excellence among schools in Montgomery County.

The schools with more Asians enrolled tended to do significantly better across all metrics than the schools with fewer. However, Asian enrollment also tended to cluster in a small number of schools, parents say, so “local norming” the students would allow the school administrators to systematically exclude large numbers of high-performing Asian kids.

In the end, the parents who brought the suit allege, the Montgomery County school system’s intended result was to suppress Asian admissions, and those efforts largely were successful.

At least, that is, until the Association for Education Fairness sued.

“In my humble opinion on academic admissions, all students are supposed to be treated equally and judged by their characters and academic performance regardless of their race,” Guo told The Daily Signal in the Monday email.

“If we win this case,” she said, “it means that our justice system is still alive and effective; if we win, my son will not have to worry about being denied by [gifted and talented] programs just because of his race.”