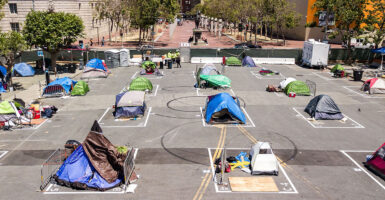 Rectangles are painted on the ground to encourage homeless people to keep social distancing at a city-sanctioned homeless encampment across from City Hall in San Francisco, California, May 22, amid the COVID-19 pandemic. (Photo: Josh Edelson/AFP/Getty Images)

The growth of public encampments, particularly in West Coast cities, has put homelessness back in the headlines in recent months.

In some neighborhoods in Seattle, Portland, San Francisco, and Los Angeles, thousands of men and women are sleeping outdoors. City officials seem unable to deal with the associated crime, public drug abuse, and social disorder.

The Department of Housing and Urban Development continues to spend billions of dollars per year on homelessness, yet its “progressive” programs have made little progress in stopping its spread. Despite large-scale investments in subsidized and permanent supportive housing over the past decade, the number of people on the streets has actually increased year over year.

The core problem is that policymakers have misdiagnosed the causes of homelessness. They have insisted that homelessness is a housing problem and that the solution is to provide free housing with no requirement to participate in drug or mental health treatment. This approach, called “Housing First,” is the dominant policy at all levels of government, local, state, and federal.

At HUD, the single largest funder of local homelessness programs, policymakers have dedicated approximately 74% of all competitive grants to Housing First programs.

The Housing First approach—“give the homeless housing”—sounds good in theory. But a growing body of evidence indicates that it is enormously expensive and does little to improve the lives of the homeless.

Yet even with this support, the number of Pathways to Housing residents suffering impairment related to substance abuse increased over a 12-month period; and none of the individuals with substance abuse disorders achieved recovery.

In its most important responsibility—to improve human lives—the Housing First philosophy has failed. Rather than continue to be guided by an ideological commitment to Housing First, policymakers should reevaluate their approach to homelessness from the bottom up.

The intentions behind Housing First might be noble, but in practice, this intensely expensive approach cannot be scaled up to meet the needs of the hundreds of thousands currently sleeping on the streets—and will do little to transform their lives.

A multi-decade study of Treatment First facilities conducted by researchers at the University of Alabama at Birmingham has shown breathtaking results. In contrast to Housing First, participants in the Treatment First programs show dramatic human improvement, with nearly half of all residents recovering from substance abuse, maintaining housing, and gaining stable employment after one year.

In reorienting the public response to achieve better outcomes, policymakers must begin with a simple premise: Any effort to reduce homelessness must address addiction, mental illness, and social pathologies—not just physical housing.

Policymakers at HUD, who set the tone for the nation’s entire homelessness response, have the opportunity to lead on this important reform agenda. Through the regulatory process, they can shift funding to Treatment First programs, such as those operated by rescue missions, rehabilitation centers, and recovery homes.

Although the Housing First philosophy is deeply entrenched among a coalition of service providers, political activists, and organized interest groups, the evidence show that these programs fail to produce the desired results.

If the Trump administration and leaders at HUD can overcome the resistance of organized interest groups, they can establish an important legacy—shifting the nation’s homelessness policy toward better outcomes and dramatically improving human lives.

That’s a cause worth fighting for.