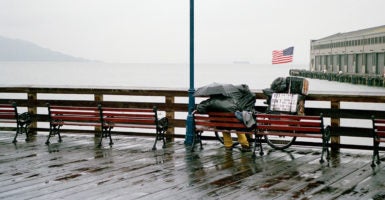 There are now an estimated 166,752 people on the streets in California, Oregon, and Washington. (Photo: Ivo Gabrowitsch/Getty Images)

Christopher F. Rufo is a documentary filmmaker, contributing editor at City Journal, and research fellow at Discovery Institute’s Center on Wealth, Poverty, and Morality. He has directed four films for PBS, including "America Lost".

The homelessness crisis in America’s West Coast cities is beginning to draw national attention. There are now an estimated 166,752 people on the streets in California, Oregon, and Washington, and sensational stories of human despair and the return of medieval diseases have captured the public imagination.

Even President Donald Trump has tweeted about the “very bad and dangerous conditions” in San Francisco and warned that leaders must take action “to clean up these hazardous waste and homeless sites before the whole city rots away.”

There has been remarkably little clarity, however, on the key question: What’s really driving the homelessness crisis in West Coast cities?

For the past decade, progressive political leaders, activists, and media organizations have insisted that housing costs are the primary cause of homelessness. There is some truth to that: It’s obvious that in the largest West Coast cities, where a one-bedroom apartment rents for at least $2,000 a month, it’s more difficult for low-income individuals to afford stable housing.

However, as an emerging body of evidence shows, homelessness in America’s West Coast cities—particularly unsheltered homelessness—is not driven primarily by high housing costs, but rather by three interrelated phenomena: addiction, mental illness, and permissive public policies.

In cities such as Los Angeles, Seattle, and San Francisco, residents have complained about rampant public drug consumption, psychotic episodes, and millions of used hypodermic needles that have been discarded on city streets.

Still, despite the obvious visible evidence, progressive political leaders have insisted on the fiction that addiction and mental illness are only a small part of the homelessness crisis. Seattle Mayor Jenny Durkan insists that only “1 in 4” of the homeless struggle with drugs and alcohol, while Los Angeles Mayor Eric Garcetti does not even list addiction as one of the major causes of homelessness on his official website.

However, as the Los Angeles Times has demonstrated in a recent investigation, “mental illness [and] substance abuse … are much more pervasive in Los Angeles County’s homeless population than officials have previously reported.”

While the Los Angeles Homeless Services Authority reported substance abuse for only 14% of the homeless population, according to a UCLA study, the real figure is likely to be 75%—more than five times higher than the official estimates.

The figures are similar for mental illness. Government authorities have estimated that 25% of the unsheltered population suffers from mental illness, while the UCLA study suggests that the true number is likely to be 78%.

As the Times points out, “the findings lend statistical support to the public’s frequent association of mental illness, physical disabilities, and substance abuse with homelessness.”

Put another way, the politically incorrect perception that homelessness, substance abuse, and mental illness are deeply intertwined is, in actuality, factually correct—and political leaders who insist otherwise are in a state of deep denial, preferring an ideological fiction to the harsh reality of life on the streets.

Unfortunately, the progressive political class in major West Coast cities is compounding the homelessness crisis with a set of permissive public policies.

Contrary to the conventional wisdom, homelessness is not a national crisis. In fact, homelessness has declined 14.6% nationwide over the past decade, while at the same time increasing dramatically in major West Coast cities, such as Los Angeles, San Francisco, Portland, and Seattle.

In part, it’s because these cities have adopted permissive policies on public camping, drug consumption, and property crime, which has created an attractive environment for the homeless.

In Los Angeles, more than one-third of unsheltered adults migrated to Los Angeles County after becoming homeless. In Seattle, even the former homelessness czar has admitted there is a “magnet effect” because of the city’s policies and availability of services. (As I have reported for City Journal, 9.5% of Seattle’s homeless population moved to the city “for legal marijuana,” 15.4% “to access homeless services,” and 15.7% were “traveling or visiting” and decided to stay.)

If political leaders in West Coast cities truly want to reduce street homelessness, they must first break through their denial about its causes.

Although reducing housing costs is a critical public policy goal, it will not significantly reduce the number of people on the streets. The compassionate response is not to maintain the fiction that homelessness can be solved with new housing developments, but to grapple with the complex human challenges of addiction and mental illness.