‘This Is the Liberal Establishment’: As Homelessness Rises in Major Cities, Trump Speaks Out 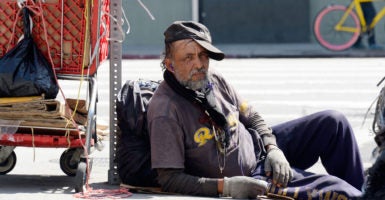 A homeless man reclines in the skid row section of Los Angeles on Sept. 23, 2015. The homeless population count in Los Angeles County leaped 12% in the past year to almost 60,000, according to officials. (Photo: Kevork Djansezian/Getty Images)

President Donald Trump says he is working on a plan to address a spike in homelessness in the United States, particularly in several California cities.

“It’s disgraceful. I’m going to [propose something], maybe, and I’m looking at it very seriously,” Trump told Carlson on “Tucker Carlson Tonight.” “We’re doing some other things that you probably noticed.”

The homeless population in Los Angeles is about 60,000, according to numbers released in June by the Los Angeles Homeless Services Authority—a 12% increase from last year.

That’s more than one-tenth of the nation’s homeless in a single city.

Nationally, about 553,000 are homeless, according to a December 2018 review by the U.S. Department of Housing and Urban Development.

In other California cities, from 2017 to 2019 homelessness increased by 17% in San Francisco and 43% in Alameda County, which includes Oakland, The Wall Street Journal reported.

Four of the top 10 largest homeless populations are in California, according to a Forbes analysis of the HUD report.

“Some of them have mental problems where they don’t even know they’re living that way,” Trump also said during the Fox News interview.

The president commented directly on the nearly 7,000 homeless in Washington, D.C.

“When we have leaders of the world coming in to see the president of the United States and they’re riding down a highway, they can’t be looking at that,” Trump said. “I really believe that it hurts our country.”

“They can’t be looking at scenes like you see in Los Angeles and San Francisco … so we’re looking at it very seriously,” the president said. “We may intercede. We may do something to get that whole thing cleaned up. It’s inappropriate.”

Homelessness overall has been on the decline by 95,000 since 2007, according to HUD, and the number of homeless military veterans has dropped by 50% since 2010.

“Like many Americans, the president has taken notice of the homelessness crisis, particularly in cities and states where the liberal policies of overregulation, excessive taxation, and poor public service delivery are combining to dramatically increase poverty and public health risks,” White House spokesman Judd Deere told The Daily Signal.

“Last week, the president took action and signed an executive order to confront the regulatory barriers to affordable housing development, a leading cause of homelessness,” Deere said. “President Trump has directed his team to go further and develop a range of policy options for consideration to deal with this tragedy.”

In Los Angeles, the average rent paid is 49% of median income. For every 2 percentage points that number increases, an additional 4,227 persons are likely to become homeless.

There shouldn’t be a real federal government role for addressing homelessness, contends Kerry Jackson, a fellow with the Pacific Research Institute’s Center for California Reform.

“I don’t see a federal role at all regarding the homelessness issue, any more than I see a federal role for education and many other places where Washington has become involved,” Jackson told The Daily Signal. “It is a state and local issue, and they already have incentives to do the right thing.”

Mental illness is assuredly part of the problem, said Joel Griffith, a research fellow in financial regulation at The Heritage Foundation.

“A lot of homelessness comes from cities refusing to involuntarily commit people who are mentally ill,” Griffith told The Daily Signal. “A lot are not seeking proper health care or shelters that are available.”

Nationally, almost one-quarter of all homelessness is found in Los Angeles or New York City, according to the HUD report in December, about six months before the increased numbers in Los Angeles released in June.

The HUD report shows these numbers for major cities, in descending order:

Los Angeles: a combined homeless population of 49,955 in the city and county, a number that has skyrocketed significantly.

Seattle: 12,112 homeless in the city and surrounding King County, the largest county in Washington state.

San Diego: a combined homeless population of 8,576 in the city and county.

San Jose/Santa Clara: a combined homeless population of 7,254 in the neighboring California cities. Homelessness grew by 42% in San Jose and 31% in Santa Clara over the past two years, according to The Wall Street Journal.

San Francisco: 6,857 homeless, though the city’s related problems draw much media attention. Still, federal data shows that no city has a greater homeless portion of its population than San Francisco. For every 100,000 residents, 492 are homeless.

In more updated numbers, spanning 2017 to 2019, The Wall Street Journal reported a 17% increase in homeless residents of San Francisco.

Phoenix: 6,298 homeless in the Phoenix, Mesa, and Maricopa County region.

Boston: 6,188 homeless in the other East Coast city other than New York to be noted by HUD.