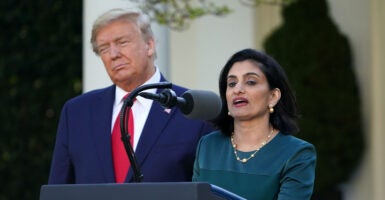 The Trump administration has made several free market reforms in health care that should contribute to the solvency of Medicare and Medicaid, the official in charge of the programs says.

President Donald Trump, both as a candidate and as an officeholder, has opposed structural entitlement reforms backed by some conservatives.

But the Trump administration’s actions on deregulation and price transparency prompted competition and produced savings for the medical programs, Seema Verma, administrator of the Centers for Medicare and Medicaid Services, said in an interview last week.

“Across the board, we’ve tried to look for regulatory changes, changes to the law, that make long-term impacts to the health care system and that will make these programs more sustainable,” Verma told The Daily Signal.

Special interests have tried to block some reforms, she added.

“The president is not afraid to take on special interests to make the health care system more sustainable,” Verma added. “So, this work he has done is making Medicare and Medicaid more sustainable. What we are taking on is the cost of health care.”

However, the Medicare trustees report issued in May provided less than promising news, said Robert Moffit, a senior fellow in health policy studies at The Heritage Foundation.

“Even with some of the welcome and worthwhile administrative changes made by the Trump administration, they will not usher us all into the sunny uplands of fiscal rectitude,” Moffit told The Daily Signal in an email.

“In fact, the 2020 trustees report was issued without the benefit of an analysis of the negative impact of the major loss of the payroll revenue (with the stark rise in unemployment) needed to sustain the already troubled Medicare trust fund,” he said.

Moffit, a former assistant secretary in the Department of Health and Human Services during the Reagan administration, continued:

The best change is to harness the defined-contribution approach, which maximizes both the free market forces of consumer choice and real competition among plans, to improve coverage and secure savings to both taxpayers and beneficiaries alike.

We already have seen the effectiveness of that approach in the Medicare Advantage program and the Federal Employees Health Benefits Program, [which] covers approximately 8 million federal employees and retirees and their families.

“One of the changes we made was to pay hospitals and hospital outpatient facilities for doctor visits with the same reimbursement we pay doctor’s offices,” Verma said, adding:

That is a situation where it actually lowered the government’s cost, lowered the cost for our beneficiaries, and it has the downstream impact of reducing the tendencies of these hospitals to buy up physician practices and create monopolies, which increase costs.

“We’ve also done a lot of work to allow more flexibility for ambulatory surgery centers, allowing them to perform more procedures where we know the quality is better and the cost is lower, and we give beneficiaries more choices,” Verma said. “So, over time, that’s another change that is going to make a big difference in terms of lowering costs.”

In February, the Centers for Medicare and Medicaid Services issued a rule to modernize Medicare Advantage, which offers private health plans that contract through Medicare and the Medicare Part D prescription drug program.

The new rule promoted the use of generic drugs and would allow beneficiaries to know out-of-pocket costs in advance. The change was expected to increase revenue for the two Medicare programs by just under 1%. The Part D program was required to offer drug price comparisons beginning in January 2022.

“We went through the Medicare Advantage policies, and we made a lot of regulatory changes, giving more flexibility to the plan, getting rid of burdensome regulations, and the result was we are at a 13-year low in terms of the premiums that Medicare beneficiaries are paying,” Verma said.

She said similar savings are happening in the prescription drug program after an administration push to lower drug prices.

A lot of the changes we made provided more flexibility, really getting government out of the way and allowing the free market to work better.

While those programs are just part of Medicare, she said, “I think some of the changes we made in Medicare policies are not only going to lower costs for our beneficiaries and our taxpayers, but they also have a downstream impact on the entire health care system.”

Part A is running annual deficits and projected to become insolvent in 2026, the report found.

The report estimated long-term balance would be secured through either an “immediate” increase in the Medicare payroll tax from 2.9% to 3.6% or a cut in Medicare hospitalization spending by 16%.

The trustees report projects general revenues to fund Medicare Part B, the general medical program, will consume 15.8% of personal and business income taxes. In 10 years, that amount will jump to 22.1% of all such taxation.

“Growth under either of these scenarios would substantially increase the strain on the nation’s workers, the economy, Medicare beneficiaries, and the federal budget,” the trustees’ report says.

Verma said that Trump “wants to deliver on his promise to take care of beneficiaries and for Medicaid to ensure we have a safety net system that is sustainable.”

In January, the Centers for Medicare and Medicaid Services announced the Healthy Adult Opportunity program, which is an optional program for states to participate in as part of the Medicaid program.

Medicaid is a jointly funded federal-state program providing health care coverage to the poor and those under 65. The program was designed to allow states to be innovative with use of federal dollars, but still accountable for results.

It gives states the ability to manage drug costs and flexibility to waive certain requirements, such as retroactive coverage periods, and the ability to engage beneficiaries through nominal premiums and cost-sharing, according to the Centers for Medicare and Medicaid Services.

“We’ve heard every conservative talk about block grants,” Verma said. “It’s a long-standing, long-held view that the Medicaid program would work better if it was in a block grant. Unfortunately, Congress didn’t take action on this, so the president did. We have allowed for a block-grant opportunity for states.”

The Trump administration has cracked down on fraud and abuse, she noted.

“I can tell you when I came to this administration, they had a backlog of what we call ‘disallowances,’” Verma said. “Those are cases where we know the state has been claiming federal Medicaid funds inappropriately. The previous administration did nothing about it. We actually cleared that backlog, recovering billions of dollars, and we continue that work.”

Integrity has been a big part of our agenda, she noted:

The president’s recent work on Medicaid’s fiscal accountability rule is all about providing transparency into how states are claiming these dollars and to make sure it’s being done in an appropriate way, and to ensure that public providers are not competing against the private market.