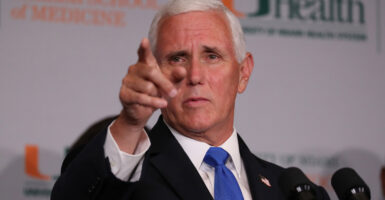 Vice President Mike Pence, seen here at the University of Miami Miller School of Medicine on July 27 in Miami, was unfairly branded by The Washington Post's "fact checker" this week as lying about voter fraud. (Photo: Joe Raedle/Getty Images)

Glenn Kessler, the so-called “fact checker” at The Washington Post, this week called out Vice President Mike Pence’s answer to an interview question about election fraud. But it’s Kessler, not Pence, who deserves four “Pinocchios” for many of the misleading claims he makes about it in his column.

Pence said: “Make no mistake about it. The reality of voter fraud is undeniable. We’ve seen case after case around the country where there have been prosecutions.”

Kessler concentrates on a case in Indiana that the vice president—a former governor of that state—mentioned in passing, and the dispute is over the timing and exact details.

Fraudulent voter registrations were submitted by 12 individuals working for the Indiana Voter Registration Project, which, according to Kessler, was “associated with Patriot Majority USA.”

Pence characterized the case as “falsifying ballots.” Charges were eventually dismissed against one of the defendants; two pleaded guilty to perjury, but were given probation and no jail time; and nine agreed to pretrial diversion deals, in which they admitted their wrongdoing and, according to Kessler, “the cases were dismissed without prosecution.”

Kessler tries to characterize all of this as a minor incident because no one served any jail or prison time. All that demonstrates is that all too often, defendants who commit election fraud are treated too lightly by judges and prosecutors.

He also doesn’t seem to understand what a pretrial diversion program is when he says the prosecutions were “dismissed,” as though that means prosecutors really didn’t have a case against them.

What Kessler gets wrong is this: There was a prosecution. He acknowledges that the defendants admitted their wrongdoing.

According to the IndyStar, they were given the privilege of participating in a pretrial diversion program in which they paid court costs, completed community service, and stayed out of legal trouble in “return for having the charges dismissed.”

There was no conviction of these nine defendants, but there certainly was a prosecution. The fact that the defendants were in a diversion program doesn’t erase the fact that they committed voter registration fraud and were prosecuted for it.

Kessler also tries to minimize this fraud by claiming it is not really voter fraud and that no fraudulent ballots were submitted as a result of these fraudulent registrations.

But that’s only because election officials caught these false registrations before they could become effective.

Kessler even cites The Heritage Foundation’s Election Fraud Database, claiming we only categorize voting under a false registration as “voter fraud.” No, voter registration fraud is election fraud.

And the term “voter fraud” covers all types of election fraud, whether it is committed by a voter or committed against a voter by others resulting in the dilution or theft of that voter’s vote.

Kessler also ignores the other cases of proven election fraud listed in Heritage’s database for Indiana, where false registrations that were not initially detected did, in fact, lead to fraudulent ballots being submitted.

That includes one Jerome Kesler (who I’m sure is no relation) who was convicted in 2017 of voting in Indiana from an Indiana address, even though he was a resident of Illinois. There are more than 40 other instances of convictions in Indiana for false registrations where defendants voted in precincts where they didn’t live.

In fact, there have been almost four dozen election fraud cases in Indiana (some with multiple convictions) since 2003, including numerous prosecutions in East Chicago, Indiana, over a Democratic mayoral primary that year.

That election was overturned by the state Supreme Court due to “voluminous, widespread, and insidious” absentee ballot fraud. That case also included convictions of voters who were voting in precincts where they didn’t actually reside.

The East Chicago case demonstrates one of the unfortunate aspects of absentee ballot fraud; namely, the voters who are often preyed upon and whose votes are stolen, altered, forged, and forced.

Those targeted in East Chicago in “a predatory pattern” were “first-time voters or others less informed or lacking in knowledge of the voting process, the infirm, the poor, and those with limited skills in the English language.”

That’s an important fact to keep in mind, given the current unwise push for all-mail elections.

Kessler even tries to minimize the perjury charges that two of the defendants pleaded guilty to for lying on the state-required affidavit, in which they affirmed under oath that they accepted the completed voter registration form from an applicant.

He says there would “have been no basis for a perjury charge” if the defendants had used the federal voter registration form instead of the state form because the federal form “does not have the same affidavit.”

Really? Kessler seems to be unaware that it is a felony under federal law, 52 U.S.C. § 20511, for individuals like the staff of the Indiana Voter Registration Project to procure or submit “voter registration applications that are known by the person to be materially false, fictitious, or fraudulent.” There is a similar provision in the Voting Rights Act, 52 U.S.C. § 10307.

Whether they were using the state or federal voter registration form, they were breaking the law. These two defendants are lucky that local prosecutors went after them, not federal prosecutors, because it’s highly likely they would not have gotten away with only probation, no jail time, or pretrial diversion programs.

The vice president is correct when he said that “the reality of voter fraud is undeniable” and that “we’ve seen case after case around the country where there have been prosecutions.”

In fact, Heritage’s database is up to almost 1,300 proven cases of election fraud. And the database is by no means comprehensive; it is just a sampling of cases.

There are many vulnerabilities in our system that too many people ignore. If you don’t look for something, you are not likely to find it, and that is the case with respect to too many officials pursuing election fraud cases.

As the U.S. Supreme Court said in 2008 when it upheld Indiana’s voter ID law, “Indiana’s own experience with fraudulent voting in the 2003 Democratic primary for East Chicago Mayor … demonstrate[s] that not only is the risk of voter fraud real, but that it could affect the outcome of a close election.”

I guess, according to The Washington Post’s standards, the Supreme Court would get four “Pinocchios” for that recognition of reality.