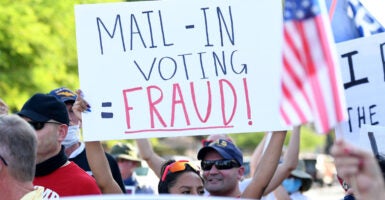 Nevadans protest the passage by the Democrat-controlled Legislature of a mail-in voting bill at the Grant Sawyer State Office Building on Aug. 4 in Las Vegas. (Photo: Ethan Miller/Getty Images)

Adam Laxalt is a former Nevada attorney general. A Republican, he ran unsuccessfully for governor of Nevada in 2018.

Bills that genuinely promote the common good typically don’t get rushed to passage under the cover of night on strict party-line votes. Yet that’s what Nevada Democrats have done with an “election reform” measure they just pushed through an emergency special session of the state Legislature.

Nevada Gov. Steve Sisolak and his legislative allies claim the 100-page bill—the crux of which is an unprecedented expansion of mail-in voting and an allowance for “ballot harvesting”—is a necessary safety precaution in the face of the COVID-19 epidemic.

In reality, it’s a blatantly partisan attempt to radically overhaul Nevada’s elections in a way that blows the door wide open to widespread voter fraud.

The bill, which the governor signed into law on Monday, includes a number of changes that severely undermine the security of elections in this key swing state.

It requires that all active voters receive a mail ballot, whether they’ve requested one or not. It provides that ballots received by election officials without a postmark for up to three days after Election Day be considered valid by default.

It allows ballot harvesting on a broad scale, and for multiple ballots to be submitted in a single envelope with only a single signature required on the envelope, and no signature requirement for the enclosed individual ballots, leaving it to the discretion of election officials to decide whether the votes should count.

It allows for an individual to sign a ballot on another’s behalf. And it allows for drop boxes for collecting ballots with no signature requirement—which is an even more dangerous form of ballot harvesting, which conventionally at least requires a signature.

Curiously, the same bill also provides for a huge expansion of in-person voting sites—indeed, the greatest number of sites in history for Clark County, the largest county in the state.

As the experiences this year of states such as Wisconsin, Florida, and many others have shown, voting in person can indeed be done safely. And Nevada’s secretary of state has said that Nevada can hold in-person elections safely, while allowing for those who are concerned about health risks to request an absentee ballot.

Yet, this bill’s in-person voting expansion completely undercuts the Democrats’ argument for such a huge increase in mail-in voting; namely, that in-person voting during the COVID-19 crisis creates an unacceptable health hazard.

But consistency in responding to COVID-19 has never been Sisolak’s strong suit. While taking a heavy-handed approach to shutting down economic activity in some industries, and also implementing draconian limitations on church attendance, he has allowed for politically favored construction projects to move forward, for casinos to be packed with visitors, and for restaurants to stay busy, while also saying and doing nothing to stop the swell of protests that recently broke out across Nevada.

Yet, apparently, it’s so crucial for Nevadans to practice social distancing that we need a revolutionary expansion of mail-in voting? Which is it, Governor?

Given how fraught this bill is with problems, and how hypocritical they’re proving themselves to be on this issue, it’s no wonder Nevada’s Democrats—who control not only the governor’s office, but also both houses of the Legislature—never showed the contents of the bill to either the secretary of state or Republican lawmakers before moving it forward, nor did they allow members of the public to be present for the weekend midnight session.

All of this adds up to strong reason for Nevadans to be gravely concerned about the integrity of their vote this November.

There has been a long-standing, bipartisan recognition that mail-in voting dramatically increases the risk of voter fraud. A 2005 bipartisan report of the Commission on Federal Election Reform, chaired by Jimmy Carter and James Baker III, concluded, among other things, that “vote-buying schemes are far more difficult to detect when citizens vote by mail.”

And none other than The New York Times acknowledged just a few years ago that “there is a bipartisan consensus that voting by mail … is more easily abused than other forms.”

Recent cases of mass fraud in North Carolina and other states have only validated those concerns further.

Even in the absence of explicit intent to leverage mail-in voting for fraudulent purposes, there are significant procedural and logistical challenges that would come with trying to effectively implement such a dramatic electoral overhaul in a high-stakes presidential election year.

New York state’s recent primary debacle, in which the huge influx of mail-in ballots led to disaster in trying to determine the results, should serve as a warning to other states—including Nevada, where the secretary of state’s office has fewer than five investigators assigned to protecting our elections—of the kinds of problems that may well ensue this November as a result of taking a similar path.

The more states that go down the mail-in road, the more likely it becomes that the entire nation will be plunged into confusion and chaos this fall.

Yet, for obviously partisan reasons, Nevada Democrats have chosen to spit in the face of history, bipartisan consensus, and even their own citizens—who by a 10-to-1 margin expressed opposition to the bill during the 48-hour window it was being debated by lawmakers—and move forward with their scheme.

The people of Nevada are right on this one. And the Democrats who dominate our state government today are not only wrong, but reckless. What they’ve just done constitutes a shameful, dangerous, and hyperpartisan assault on election integrity in our state.

This column first appeared on RealClearPolitics.com