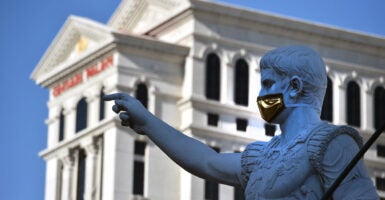 “There is no world in which the Constitution permits Nevada to favor Caesars Palace over Calvary Chapel,” said Justice Neil Gorsuch. And yet, Friday’s Supreme Court ruling is more favorable to Nevada’s entertainment venues than places of worship. Pictured: Caesars Palace in Las Vegas. (Photo: David Becker/Getty Images)

One bad decision can be a mistake. Two is a pattern.

In late May, Chief Justice John Roberts sided with the Supreme Court’s four liberal members in South Bay United Pentecostal Church v. Newsom to deny a request from a California church that it be allowed to operate under the same conditions as similar secular businesses.

The chief’s decision there was a mistake.

And unfortunately, late Friday evening, he established a pattern. In Calvary Chapel Dayton Valley v. Sisolak, Roberts again joined with the Supreme Court’s four liberal members to deny a request from a Nevada church that it too be allowed to operate under the same conditions as similar secular businesses.

So what exactly did the church ask for? That it be allowed to hold services at 50% capacity rather than having the state arbitrarily cap its attendance at 50 people, regardless of the size of its church building.

Restaurants, bars, gyms, and even casinos operate under this more permissive rule.

While the five justices in the majority did not write an opinion to explain their decision—as is common in these type of cases—this troubling ruling prompted three sharp dissents from the court’s four conservative members, Justices Clarence Thomas, Samuel Alito, Neil Gorsuch, and Brett Kavanaugh.

In late May, the chief justice was clearly troubled by the fact that the case came to the Supreme Court during a pandemic, and it clearly weighed heavily on his mind. There he wrote that the Constitution “principally entrusts” elected officials to deal with health crises and other “areas fraught with medical and scientific uncertainties.”

But as Alito and Kavanaugh pointed out, that broad discretion is less defensible in this particular case. More time has passed, and the Nevada governor treats similar activities differently based only on whether they are religious in nature. There is no pandemic exception to the Constitution.

Each dissent made compelling points.

In his dissent, Alito said:

The Constitution guarantees the free exercise of religion. It says nothing about the freedom to play craps or blackjack, to feed tokens into a slot machine, or to engage in any other game of chance. But the governor of Nevada apparently has different priorities.

Claiming virtually unbounded power to restrict constitutional rights during the COVID-19 pandemic, he has issued a directive that severely limits attendance at religious services.

A church, synagogue, or mosque, regardless of its size, may not admit more than 50 persons, but casinos and certain other favored facilities may admit 50% of their maximum occupancy—and in the case of gigantic Las Vegas casinos, this means that thousands of patrons are allowed.

That Nevada would discriminate in favor of the powerful gaming industry and its employees may not come as a surprise, but this court’s willingness to allow such discrimination is disappointing. We have a duty to defend the Constitution, even a public health emergency does not absolve us of that responsibility.

To be clear, a State’s closing or reopening plan may subject religious organizations to the samelimits as secular organizations. And in light of the devastating COVID-19 pandemic, those limits may be very strict. But a state may not impose strict limits on places of worship and looser limits on restaurants, bars, casinos, and gyms, at least without sufficient justification for the differential treatment of religion.

Kavanaugh also went to great lengths to “explain how this case fits into the [Supreme] Court’s broader religion jurisprudence,” and in fact, his thoughtful opinion may give the most insight into how the justices would frame future cases dealing with restrictions or burdens on religious activity.

Gorsuch, though, succinctly summarized the case in his brief dissent. He said:

This is a simple case. Under the governor’s edict, a 10-screen “multiplex” may host 500 moviegoers at any time. A casino, too, may cater to hundreds at once, with perhaps six people huddled at each craps table here and a similar number gathered around every roulette wheel there.

Large numbers and close quarters are fine in such places. But churches, synagogues, and mosques are banned from admitting more than 50 worshippers—no matter how large the building, how distant the individuals, how many wear face masks, no matter the precautions at all. In Nevada, it seems, it is better to be in entertainment than religion.

Maybe that is nothing new. But the First Amendment prohibits such obvious discrimination against the exercise of religion. The world we inhabit today, with a pandemic upon us, poses unusual challenges. But there is no world in which the Constitution permits Nevada to favor Caesars Palace over Calvary Chapel.

And yet, that’s exactly where we find ourselves today. That’s shameful all around.