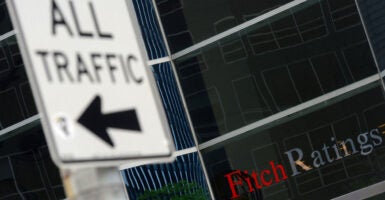 The major credit rating agency Fitch Ratings announced July 31 that it was downgrading the U.S. federal debt outlook from “stable” to “negative.” This is yet another strong signal that the rapid growth of the national debt is unsustainable.

As lawmakers negotiate another potentially expensive COVID-19 relief package, it is urgent that they limit such spending to provisions that would directly and effectively address the pandemic and economic recovery.

Most of us borrow money for major expenses at some point in our life. Whether buying a car or house, paying for college tuition, starting a business, or dealing with a personal crisis, the ability to obtain a loan is crucial to modern life.

In turn, Americans understand that having a good credit rating is vital to making a loan affordable.

The same is true for governments. Although having a low level of national debt is ideal, it is difficult to avoid altogether. Events such as recessions, wars, and natural disasters often require a government to issue debt to pay for short-term needs.

The COVID-19 pandemic and the related recession is a good example. It is a major shock to the economy and our way of life.

With tax revenues down sharply this year, Congress had to finance the emergency response through borrowing, which makes it even more important that the response is targeted, temporary, and transparent.

When such events occur, a nation typically leans on credit markets to buy the new debt. In the same way that people have credit ratings, government debt is rated-based on the expected level of risk for an investor.

The U.S. long has been the prime example of a nation whose debt is considered a safe investment. Thanks in part to our stability, the interest rate our Treasury Department needs to pay on government bonds has declined, saving taxpayers hundreds of billions of dollars per year.

However, money borrowed today still must be repaid, so low interest rates are not an excuse for wasteful spending.

Nations with high debt, weak economies, and shaky governments face much higher interest rates compared to those with frugal, prosperous, and stable governments.

Unfortunately, legislators are on the verge of completely squandering this hard-earned privilege.

The rapid accumulation of debt even during times of strong economic growth, combined with unfunded liabilities associated with programs such as Social Security, had America on a bad financial course before COVID-19 struck.

With the double punch of dramatically increased federal spending and lower tax revenue during the pandemic, the debt has risen from $23.5 trillion in mid-March to $26.5 trillion today. This means an additional $23,000 in debt per household in fewer than five months.

These facts alone are only part of the reason why Fitch Ratings downgraded the federal government’s credit rating. It also cites “the absence of a credible fiscal consolidation plan,” meaning a lack of political effort toward reducing the debt and unfunded liabilities.

Countless examples exist of officials not taking our nation’s finances seriously, from a lack of regular budgeting to utterly irresponsible spending proposals. Even the president’s most recent budget, which envisions a path to stabilizing the debt, is not quite bold enough.

The Federal Reserve currently enables this explosion of spending by digitally creating dollars and using those to purchase government bonds from the Treasury, which prevents the debt market from being overloaded.

In under a year, the Federal Reserve has more than doubled the amount of U.S. government debt it owns (printing money to buy debt), leaping from $2.1 trillion to $4.3 trillion, most of this coming during the COVID-19 crisis.

This allows politicians to distribute large sums of money without immediately raising taxes or overloading credit markets, a process that simply cannot go on forever.

Future generations will bear the brunt of the consequences.

We have little reason to worry about inflation today, but eventually the Federal Reserve will have to reverse those actions and sell the bonds back to the public, or else risk stoking inflation.

What would happen at that point? Nobody really knows, but it could be a disaster. Since mid-March, the dollar has already lost 9% of its value relative to other currencies.

The bottom line: We will pay for this through the visible burden of direct taxation, the hidden tax of inflation, higher borrowing costs, or some combination of the three. The notion that Congress—or the Fed—simply will be able to fine-tune taxes and inflation without any consequences is a fantasy.

It is time for our leaders to take the national debt seriously.

That means addressing benefit programs that are growing at an unsustainable rate, ensuring that the next COVID-19 relief package is targeted and affordable, and adopting policies that allow a return to robust economic growth.

The current trend of more spending and more debt eventually will lead to America’s creditors demanding higher interest rates, which quickly would become a severe drag on the economy. The prosperity and opportunity we often take for granted could become a thing of the past.