After the Supreme Court’s Oklahoma Decision, the Rights of Accused on Tribal Land Are Up in the Air. Congress Should Make Things Clearer, Not Less So. 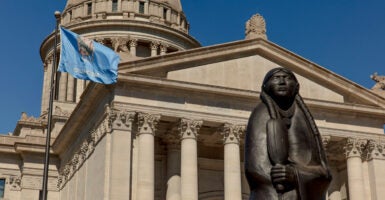 The Supreme Court’s decision in McGirt v. Oklahoma, which declared that nearly half the state of Oklahoma remained Indian reservation land, has complicated the matter of who has law enforcement jurisdiction over crimes committed on tribal lands. Pictured: The Oklahoma State Capitol. (Photo: Joe Sohm/Visions of America/Universal Images Group/Getty Images)

On the last day of the Supreme Court’s pandemic-extended term, the court declared that nearly half the state of Oklahoma remained reservation land. This thrust matters concerning jurisdiction on reservations and tribal lands on the center stage.

The implications of the Supreme Court’s decision are staggering, especially in the criminal justice context. Some 2,000 convictions may now be at risk, and federal authorities have to take over prosecutions previously pursued by the state.

Congress is currently considering legislation regarding the jurisdiction of tribal courts that may exacerbate matters—specifically, by not ensuring the rights of defendants accused of crimes on tribal lands.

By way of background, Indian Country jurisdiction is a morass of workarounds patched together to make sure that someone, anyone, can prosecute a crime if it occurs on tribal land.

A mixture of tribal, state, or federal authorities may have exclusive or concurrent jurisdiction to prosecute a crime committed on tribal land depending on who committed the crime, who the victim of the crime is, and what the crime is. Jurisdiction is often based on whether anyone involved is a member of a tribe.

Confused? Me too. But here’s a chart from the Department of Justice that aims to sort out the mess.

Frankly, the entire system needs a wholesale reevaluation. But it’s probably not the one Congress is currently considering—which is anything but wholesale and would instead add another layer of confusion onto this jurisdictional jumble.

H.R. 958 seeks to expand tribal court jurisdiction over non-Indians and to extend a process first advocated in earnest by the Obama Department of Justice as part of the Violence Against Women Act reauthorization.

Historically, the Supreme Court has said that “Indian tribes do not have inherent jurisdiction to try and to punish non-Indians.”

But Congress can adjust that jurisdiction. Still, what was true then remains true today: Non-tribe members, even if residing on tribal land or married to a tribe member, often cannot meaningfully participate in the civic life of the tribe in the same way that tribe members can.

The law also covers dating violence offenses (crimes against a current or former dating partner) on tribal lands against their tribe member partners.

State and federal authorities still retained their jurisdiction, too.

Now, the House is seeking to further expand tribal criminal jurisdiction over non-Indians, again based on tribes’ “inherent authority,” to other domestic and dating violence-related situations, as well as violence committed against a child by a caregiver, and violence committed against tribal law enforcement officers involved in preventing, investigating, arresting, or prosecuting a person for domestic violence, dating violence, or child violence.

These are all noble goals. Those who commit domestic violence against their partners, injure a child, or assault a law enforcement officer should be held accountable. (Although all of these crimes can likely already be prosecuted by state and/or federal authorities).

But it’s not the intent of Congress’ bill that’s the problem, it’s how Congress is choosing to advance it.

By extending this jurisdiction on the basis of tribes’ “inherent sovereignty,” constitutional protections afforded to the accused do not apply to the proceedings.

To address this apparent gap in protection for the accused, bills extending jurisdiction have required tribes to adopt certain procedural safeguards, and the Indian Civil Rights Act statutorily provides many of the same protections provided by the U.S. Constitution.

For example, if tribal authorities violate any of these statutory protections when arresting, investigating, prosecuting, or trying non-Indian defendants, it’s unclear that the defendant has a remedy.

Sure, habeas corpus relief is available, but it requires someone to be in custody. Which means that if tribal police violate your rights, but then immediately release you, habeas corpus wouldn’t be available because you would no longer be in custody. Your rights have still been violated, but with no clear recourse to seek a remedy.

If state officials acting “under color of” state law violate someone’s statutory or constitutional rights, the injured party can sue them in federal court for damages under 42 U.S.C. § 1983. Ditto for federal officials violating someone’s constitutional rights. They too can be sued in federal court for damages according to the Supreme Court’s decision in Bivens v. Six Unknown Named Agents.

Not so for violations by tribal authorities. Indian tribes, like states, are entitled to sovereign immunity unless Congress expressly abrogates it. So far, Congress—in most cases—has not. And the same goes for tribal officials sued in their official capacities.

Tribal officials sued in their individual capacities similarly cannot be held liable under either § 1983 or Bivens when enforcing tribal laws.

Also, it’s important to keep in mind that Bivens actions are only available where a federal officer, or someone acting under federal authority, violates someone’s federal constitutional rights.

It gets murky fast when considering whether a harmed individual can prevail against tribal officials, sued in their individual capacities, under either § 1983 or Bivens. If tribal officials are enforcing state laws, they can be held liable under § 1983. And if they violate a constitutional right while acting under federal authority, ditto under Bivens.

But when each of these scenarios kicks in is far from clear. Courts have spilled a lot of ink trying to decipher the contours. But one thing is certain: Recovery for individuals harmed by tribal authorities is far from certain.

Of course, remedies could be made available in tribal courts, and some tribal courts have recognized remedies under the Indian Civil Rights Act. But Congress hasn’t mandated it.

So, if Congress is going to expand tribal court jurisdiction and the authority of tribal officers, it should similarly expand the remedies available to individuals who may have their rights violated in the process. This is especially important now that the Supreme Court has determined that almost half of Oklahoma is, in fact, tribal land.

Ensuring remedies and access to federal courts for violated rights is something Congress should do for everyone—Indian and non-Indian alike—coming under tribal authority.