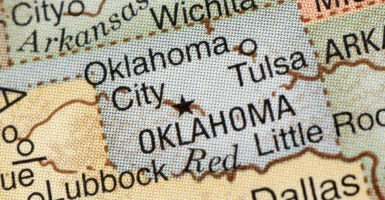 The Supreme Court issued one of the most consequential decisions of its term on its last day Thursday.

No, it wasn’t either of the decisions about President Donald Trump’s tax returns. Instead, it involved a case that received little attention at the time it was argued.

But how often can court watchers say that a case stripped a state of its sovereign power to prosecute crimes committed by certain individuals in nearly half of the territory it purportedly controls?

But that’s exactly what the court did in a 5-4 opinion in McGirt v. Oklahoma that Justice Neil Gorsuch wrote, which Justices Ruth Bader Ginsburg, Stephen Breyer, Elena Kagan, and Sonia Sotomayor joined.

Chief Justice John Roberts, joined by Justices Clarence Thomas, Samuel Alito, and Brett Kavanaugh, dissented from the decision and summarized it this way:

In 1997, the State of Oklahoma convicted petitioner Jimcy McGirt of molesting, raping, and forcibly sodomizing a four-year-old girl, his wife’s granddaughter. McGirt was sentenced to 1,000 years plus life in prison.

Today, the Court holds that Oklahoma lacked jurisdiction to prosecute McGirt—on the improbable ground that, unbeknownst to anyone for the past century, a huge [swath] of Oklahoma is actually a Creek Indian reservation, on which the State may not prosecute serious crimes committed by Indians like McGirt. …

The rediscovered reservations encompass the entire eastern half of the State—19 million acres that are home to 1.8 million people, only 10%-15% of whom are Indians.

Essentially, if McGirt committed his horrendous crimes in Indian country, which includes Indian reservations, he could only be prosecuted by federal authorities in federal court. If not, the state of Oklahoma appropriately prosecuted him.

The case boiled down to one question: “Did he commit his crimes in Indian country?”

The court answered in the affirmative and threw out his conviction. This ruling may also impact nearly 2,000 other criminal convictions of Native Americans who were prosecuted by state authorities in what has now been held to be tribal territory.

But what about Oklahoma? Is the state as we know it gone? Will the people of Tulsa—Oklahoma’s second-largest city—and other cities in the eastern half of the state suddenly find themselves subject to various tribal laws and rules?

Gorsuch and the majority say no, stating, “The only question before us, however, concerns the statutory definition of ‘Indian country’ as it applies in federal criminal law under the MCA [Major Crimes Act] … .”

Roberts and the other dissenters aren’t so sure, saying that “the Court has profoundly destabilized the governance of eastern Oklahoma. The decision today creates significant uncertainty for the State’s continuing authority over any area that touches Indian affairs, ranging from zoning and taxation to family and environmental law.”

Even the majority recognized that problems likely lie ahead. “In reaching our conclusion about what the law demands of us today, we do not pretend to foretell the future, and we proceed well aware of the potential for cost and conflict around jurisdictional boundaries, especially ones that have gone unappreciated for so long.”

Roberts hammered Gorsuch, writing, “None of this is warranted.  What has gone unquestioned for a century remains true today. A huge portion of Oklahoma is not a Creek Indian reservation. … Yet today the Court concludes that the lands have been a Creek reservation all along—contrary to the position shared for the past century by this Court, the United States, Oklahoma, and the Creek Nation itself.”

He wrote that the majority committed a grave error by ignoring the court’s precedent on the disestablishment of reservations and by “examin[ing] only individual statutes in isolation.” In his view, any “reservations were destroyed” when “Oklahoma entered the Union.”

Gorsuch, however, hammered Roberts back, saying that “many of the arguments before us today follow a sadly familiar pattern.”

“Yes, promises were made, but the price of keeping them has become too great, so now we should just cast a blind eye. We reject that thinking,” Gorsuch wrote.

According to Gorsuch, cooperation between Oklahoma and the Indian tribes and, if needed, Congress holds the keys. After all, he wrote, “Congress remains free to supplement its statutory directions about the lands in question at any time. It has no shortage of tools at its disposal.” Essentially, “If Congress wishes to break the promise of a reservation, it must say so.”

Roberts wrote that Congress has already said so and that “there is no ‘magic words’ requirement for disestablishment … .”  Furthermore, he wrote that previous cooperation between Oklahoma and the Indian tribes “are small potatoes compared to what will be necessary to address the disruption inflicted by today’s decision.”

He went on to say, “The Court responds to these and other concerns with the truism that significant consequences are no ‘license for us to disregard the law.’ … Of course not.  But when those consequences are drastic precisely because they depart from how the law has been applied for more than a century—a settled understanding that our precedents demand we consider—they are reason to think the Court may have taken a wrong turn in its analysis.”

Sorting out what this means will likely be a monumental task for everyone involved.