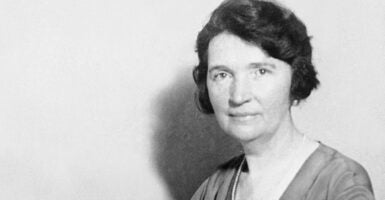 A portrait of Margaret Sanger in New York in the 1920s. She was the founder of the first North American family planning center. Here she is pictured in her Brooklyn clinic the day it was to be closed down by authorities. (Photo: Keystone-France/Gamma-Keystone/Getty Images)

One of Planned Parenthood’s largest abortion affiliates has finally disavowed Planned Parenthood’s founder for “her racist legacy” and her “connections to the eugenics movement.” However, this symbolic bowing to the far left’s “cancel culture” doesn’t change the fact that the organization is still influenced by her inhumane beliefs.

Sanger said all sorts of disturbing things, like, “We don’t want the word to go out that we want to exterminate the Negro population.” She favored the forced sterilization of those she deemed “unfit,” she gave a speech to the Ku Klux Klan, and she once wrote, “The most merciful thing that the large family does to one of its infant members is to kill it” (mind you, like Virginia Gov. Ralph Northam, she was talking about a child who had already been born).

PPGNY’s national organization, Planned Parenthood Federation of America, has long said that many of Sanger’s racist quotes have been taken out of context. While the national organization acknowledges some of Sanger’s many flaws, it says her story is “complicated” and it hasn’t totally disavowed her. It still labels her a “woman of heroic accomplishments” and it still calls its “highest honor” the Margaret Sanger Award.

However, in its news release, PPGNY parted ways with the standard talking points, acknowledging what it called “Planned Parenthood’s contributions to historical reproductive harm within communities of color.” Yet for years, Planned Parenthood has had the audacity to claim that it believes black lives matter.

As we know all too well, the cancel culture is one of the far left’s frequently used tools to destroy anyone or anything that doesn’t comport with its radical ideology. Never at a loss for hypocrisy, though, the left frequently attempts to nuance the troubling pasts of its heroes, trying to make them acceptable while at the same time tearing down statues of those who helped make America the exceptional nation it is.

Some will accuse me of having a double standard when I say that it’s OK to “cancel” Sanger while I defend statesmen like George Washington and Thomas Jefferson. Yet there’s a significant difference. While we roundly condemn Washington’s and Jefferson’s participation in the evil of slavery, we can still celebrate their lifelong work to create a nation built on the highest ideals of humanity.

Planned Parenthood still considers certain people less than human and rejects the science of prenatal development by calling babies in the womb “clumps of cells,” “tissue masses,” and “products of conception.”

Planned Parenthood also still targets minority communities. If black lives matter to Planned Parenthood, then why, according to a 2015 study, are nearly 80% of its surgical abortion facilities located within walking distance of minority neighborhoods?

According to the Guttmacher Institute, in 2014, a year when black women only accounted for about 13% of the U.S. population, they made up 28% of those having abortions. Each year in New York City, more black babies are aborted than born.

It strikes me how blatantly we see the double standard at work here. Sure, Sanger is getting “canceled,” but only at one of Planned Parenthood’s facilities and in a relatively mild way. Planned Parenthood still talks about the good she allegedly did and is willing to ascribe her transgressions to being a woman “of her time.”

How ironic that the left doesn’t give America’s Founders the same courtesy. There’s no allowance for context; no allowances for being “men of their time.” There is only cancellation and demands that everything they produced (ie. America) be destroyed.

Until Planned Parenthood stops dehumanizing living, growing children in the womb; until it ceases performing abortions; and until it stops locating facilities and advertising heavily in and around minority communities, it will continue carrying out Sanger’s original vision. “Canceling” Margaret Sanger and the symbolic gesture of removing her name from a building won’t change any of that.