Margaret Sanger Is a Hero to the Left. Here’s Her History of Ugly Views. 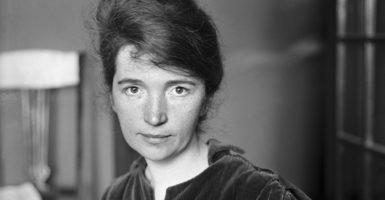 Margaret Sanger is arraigned on Jan. 18, 1916, for distributing her journal The Woman Rebel by mail. She was indicted for mailing materials advocating birth control, but these charges were dropped. (Photo: Bettmann/Getty Images)

Margaret Sanger, the women’s rights activist and founder of Planned Parenthood—the largest abortion provider in America—is a hero to the modern Left. And little wonder, given her outsized role in the founding and promotion of the modern abortion industry.

But what few people realize is that Planned Parenthood is actually more extreme than its founder, at least when it comes to abortion. In fact, Sanger, as remarkable as it seems, looks positively tame next to the modern agenda.

Which raises the question: why would Planned Parenthood, which has gone so far beyond Sanger in its promotion of abortion, eugenics, and population control, still hold her up as a leader of the movement? Isn’t she a bit behind the times?

The movement can thank prominent Progressive leaders of the last decade for raising Sanger’s profile. She’s featured prominently in liberal speeches and interviews, like when Hillary Clinton told supporters in 2009 that she was “in awe of her.” In 2014, Barack Obama became the first sitting president to address the abortion group’s national conference, praising Sanger’s legacy as its “core principle [that] has guided everything all of you do.”

Interestingly, Planned Parenthood, whose highest award still bears Sanger’s name, has moved so far to the left that its hero probably couldn’t even get a job selling T-shirts for the radical abortion giant today. If they were consistent, modern leftists would call Sanger a white supremacist or an extremist for her views on immigration, race—and yes, abortion.

Take, for example, Sanger’s desire to see America’s borders sealed to all “unfit” immigrants to protect what she considered a fragile gene pool. That sounds a lot like the caricature of pro-Trump conservatives conjured up in left-wing fantasies.

Then there was her notorious speech before a branch of the New Jersey Ku Klux Klan, a well-documented event despite the content being nearly forgotten. In that speech, Sanger warned that America must “keep the doors of Immigration closed” to genetic undesirables.

Then there’s Sanger’s opinion of non-whites, which, if uttered now, would (rightly) cause a conniption among Americans. She considered Australia’s Aborigines compulsive rapists and “the lowest known species of the human family, just a step higher than the chimpanzee in brain development.” Because he has “no great brain development,” Sanger wrote, “police authority alone prevents [Aborigines] from obtaining sexual satisfaction on the streets.”

But if Planned Parenthood was honest about its founder, Sanger’s most unforgivable “sin” would be her skepticism of abortion itself.

One of Sanger’s few criticisms of the Soviet Union when she visited the communist state in 1934 was its outright insistence on encouraging abortion over contraception. “Four hundred thousand abortions a year indicate women do not want to have so many children,” a perplexed Sanger told a Soviet doctor.

She thought that access to birth control was a “human right”—but was repulsed by abortion. “In my opinion it is a cruel method of dealing with the problem,” Sanger wrote upon returning home, “because abortion, no matter how well done, is a terrific nervous strain and an exhausting physical hardship.”

In fact, the founder of Planned Parenthood was deeply concerned about the “tremendous number of abortions” taking place in the Soviet Union, as historian Paul Kengor has documented. Legalization of abortion was one of the communist government’s first acts following the 1917 Russian Revolution—nearly 60 years before Roe v. Wadeaccomplished the same thing in America. By 1920, the Soviet Union was providing abortions free of charge to its citizens.

Sanger wrote that the number of abortions in Moscow was 100,000 per year. By the 1970s, there were 7–8 million abortions annually in the USSR—“a rate unmatched in human history,” Kengor points out. Roe v. Wade only managed 1.5 million in 1973, the year the Supreme Court legalized abortion.

By these metrics, Planned Parenthood’s position on abortion in 2020 is far closer to that of post-Revolutionary Soviet Union than their hero, Margaret Sanger.

If Progressives held Sanger to their own standards, they’d have to denounce her antiquated views—so why do they continue to applaud her? Because the Left believes that Sanger’s contributions to the pro-choice movement outweigh her racist views. So Planned Parenthood sticks with its despicable founder, refusing to disavow her altogether, to its shame.

If leftists were honest, they’d renounce Margaret Sanger—and then reflect on what it means that they’ve become even more radical than the eugenicist who started their anti-life movement.