America Is Poised to Collapse From Within 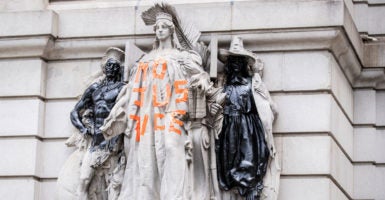 Carol M. Swain, an author and commentator, is a former tenured professor at Vanderbilt and Princeton universities.

Two hundred and forty-four years after the 13 British colonies in North America declared their independence and became a sovereign nation, America is poised to collapse from within. Her imminent demise will not come from foreign troops quartered on her soil. It will come from Marxists and anarchists who use racial grievance and the cries of the oppressed to dismantle America’s institutions and defenses.

Insurrection labeled as “peaceful protest” is the battering ram weakening our nation’s foundations. Using the voices of the oppressed and deceived masses, and their bodies and legitimate grievances as shields, is part of a deliberate plan to bring about a new order guaranteed to be worse than what exists now.

We are at a historical moment where America’s institutions of higher education, many of them founded and led by Christian leaders, have rejected their Founders and become transmission belts for socialism and Marxist propaganda.

Using concepts such as “white privilege” and “systemic racism,” these social justice warriors have inverted traditional concepts of equality, justice, and freedom as embodied in the Declaration of Independence and the U.S. Constitution with its Bill of Rights.

These foundational documents provided the institutional mechanisms for positive change that in time came through the passage of ground-breaking civil rights laws and protections—since expanded to include affirmative action designed to address and remedy the effects of past and present discrimination.

More is demanded because America’s enemies understand the heart and soul of its people. The current racial narrative that focuses on “white supremacy” is a distorted narrative aimed at achieving goals that are neither desirable nor attainable. Government cannot fix the individual choices people make that cause some to prosper and others to languish in generational poverty.

The false narratives about America’s racial evils conveniently omit the actions of Christian and Jews who worked tirelessly over the last two-plus centuries to bring about justice for the downtrodden.

Jewish and Christian men and women, often working through their congregations, risked everything to fight against the evils of slavery and to empower newly freed slaves and hardworking freedmen. As a result, many of those helped with a hand up went on to establish businesses and attain educations that enabled them to become valued and productive citizens.

The current agitation for defunding police departments on top of demanded reparations ignore basic facts of history. Chaos ensues in the absence of law enforcement, and any monetary benefits from reparations to the descendants of slaves comes on top of the trillions of dollars already spent on programs and scholarships that have helped many blacks to thrive in America.

The current racial narrative uses the oppressor/victim rhetoric to make a new class of victims among white people who are supposed to feel shame because of their race and ancestry. This is being accomplished through the brainwashing of America’s youth and the silencing of white adults who know better.

There is a disregard for the individuality and struggles for millions of white Americans who bear no responsibility either for the sins of their ancestors or the choices of other groups.

As a nation we best return to the pursuit of life, liberty, and justice as core principles and non-negotiable human rights. We are at a moment where our nation is at the mercy of domestic extortionists. They have usurped power from impotent leaders no longer willing to fight for principles higher than themselves. Love of God and country have yielded to love of self.

All this has left our nation teetering on the edge of a precipice. I believe we have a small window of time to reclaim our core values and principles. Reclaiming what made America unique among nations will require educating young and old about national history and its Judeo-Christian roots. It will also require civic knowledge and a return to patriotism. It is the American national identity that will hold us together, not the divisive tribalism fostered by identity politics.

If we are to survive this moment of massive unrest, men and women of goodwill must step up to build on what our nation’s Founders left behind. Building will require a rediscovery of our founding documents and the biblical principles that emphasize loving one’s neighbor as one’s self. The Golden Rule to do unto others as you would have them do unto you applies.

Our greatest universal strength lies in our written Constitution, which provides the basis for the rule of law. It is time for our leaders of all races to defend the document that has stood the test of time.

Under our system of government, the power rests in the hands of the people. It is “We the People” addressed in the preamble of our great Constitution who must stand up; it is “Be the People” who will reclaim their nation and its Judeo-Christian heritage and what that has meant to the world.