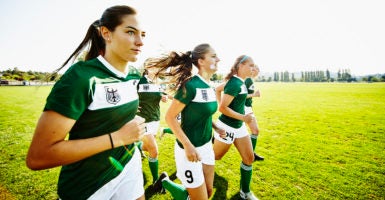 Bills restricting transgender students’ involvement in school-sponsored athletics are up for consideration in 14 states, according to the left-wing Human Rights Campaign.

Legislatures adjourned amid the coronavirus pandemic, so actions have not been taken on pending bills, Axios reported. However, special sessions are likely to resume in the coming weeks and it’s possible the transgender bills may receive attention.

Oakley anticipates special sessions will start as soon as late July, telling Axios: “If they say, ‘You know, we were only in session for a month so consider this a new general session,’ I anticipate we’ll see these bills pop back up.”

A poll released in November 2019 found that less than a third of Americans believe biological males who identify as transgender should be allowed to compete on girls sports teams. Another poll released in October 2019 found that Americans said by a 57-20 margin that male athletes who self-identify as transgender have competitive advantages over female athletes.

Transgender athletes were prohibited from competing with women’s sports teams in public schools, colleges, and universities in Idaho after Republican Gov. Brad Little signed a bill into law in March, Axios reported.

The American Civil Liberties Union claimed the law infringes on students’ Fourth and 14th Amendment protections and filed a suit against the law, Axios reported.

According to Oakley, 66 bills were recently introduced against transgender involvement in school-sponsored sports and 25 are still under consideration, Axios reported.

The Human Rights Campaign, the American Civil Liberties Union, and Little did not respond to The Daily Caller News Foundation’s request for further comment.