In the Name of Tolerance, California Blacklists Idaho 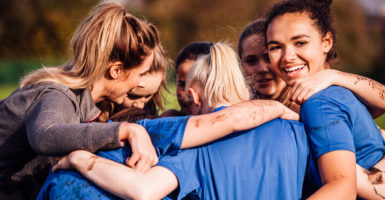 Idaho's Fairness in Women’s Sports Act ensures that female athletes can safely and fairly compete in sports. The law bans biological males who say they identify as girls or women from participating in female sports at public schools, colleges, and universities. (Photo: SolStock/Getty Images)

In a bizarre show of authoritarianism—even for them—California state officials have decided to ban state-funded travel to Idaho because of its transgender law.

In a press release, California’s attorney general, Xavier Becerra, said: “Where states legislate discrimination, California unambiguously speaks out. The state of Idaho has taken drastic steps to undermine the rights of the transgender community, preventing people from playing sports in school or having documentation that reflects their identity.”

In his comments Monday, Becerra was referring to legislation signed by Idaho Gov. Brad Little that banned biological males who say they identify as girls or women from participating in female sports at public schools, colleges, and universities.

House Bill 500, the Fairness in Women’s Sports Act, passed by a significant margin in Idaho’s House and Senate. It wasn’t even controversial among Idaho residents.

The California Legislature, known for creating inclusive legislation, has a provision on the books that struck back at Idaho for passing this act.

How convenient! The Legislature passed Assembly Bill 1887, which prohibits taxpayer-funded travel to states with “discriminatory” practices. The ban applies to all of California’s state agencies, departments, boards, authorities, and commissions, and all its public universities.

Following Idaho’s passage of its transgender bill, California added Idaho to its list of states already subject to the travel ban. Idaho becomes the 11th state on the blacklist, along with Texas, North Carolina, South Carolina, among others.

What’s maddening about this move is that California fancies itself the model of progress, the example of fairness, equality, and inclusivity. Frankly, in many ways, it is.

But passing a provision that blacklists states that ensure everyone’s freedoms remain intact, then making a big show of adding a state to that list as if that state had committed a crime, seems a bit contradictory, if not hypocritical.

So much for tolerance.

It’s not only showboating but in direct opposition to all the things California says it stands for.

If any state is going to be pro-woman, wouldn’t it be California, home of Hollywood, the place where so many dreams come true for women in entertainment?

If any state is going to be pro-inclusivity, why is it a bridge too far for California to honor a state that honors women, just as San Francisco and Los Angeles are home to some of the largest gay populations in the country?

Why can’t California be tolerant of women and transgender individuals? If anything, the move appears so anti-feminist that I’m not sure how California can claim to be pro-feminist after this. It’s extraordinarily difficult, if not impossible, to be pro-woman and pro-transgender; the outlooks are diametrically opposed to one another.

California can do what it wants, of course, just as Idaho can.

Idaho passed this perfectly logical provision ensuring that women, in sports, can safely and fairly compete only with biological women. The Legislature—the voice of Idaho’s residents—passed this bill.

California’s response, to blacklist Idaho, seems immature—if not overly authoritarian, even for California.

What’s been accomplished other than some political grandstanding?

Progressives have ushered in a trend that hasn’t been happening long, but it’s proven effective in a short amount of time: They yell “Discrimination!” over anything uncomfortable, different, or even traditional.

Since when is it discriminatory to say that only girls can play on a girls soccer team?

That’s not discriminatory, them’s the rules.

A state that’s unwilling to partner with another because the second state wants to treat women with fairness is trading one movement for another, a far more progressive one. I can tell you that the transgender ideology is far less forgiving than the feminist movement ever will be.

“Discrimination” has become a buzzword with so many applied meanings to fit all interest groups that it now has almost no meaning. The word fails to cover even the lowest denominators, such as race or religion, which were the original triggers for anti-discrimination laws that nearly everyone agrees on.

Not anymore. Those categories are so 2019. They are now co-opted by transgenderism—the cause du jour.

This has hurt everyone, including those who need protection from discrimination the most, as they are the groups that really are discriminated against. In this case, it’s women, who have fought hard for equality in sports, among other public arenas.

California is a state that used to exemplify a kind of gutsy, progressive, American individualism and exceptionalism, with its stunning films, gay pride parades, and dazzling Orange County wealth.

But by succumbing to the progressive mantra that everyone except straight white men is discriminated against, and every act is discriminatory, California has fallen prey to its own game. It has watered down the best aspects of the Golden State to a dull sheen.

California is leading the way in the discrimination wars, and it’s losing a battle it never can win.