4 Things to Know About the British Group Targeting The Federalist 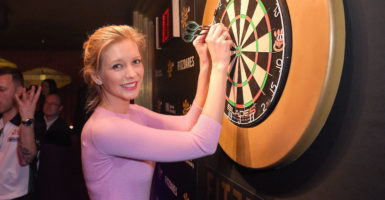 Rachel Riley, a well-known British game show host, is listed as patron of the Center for Countering Digital Hate. Pictured: Riley at Fitzdares' "Darts at the Arts" event at The Arts Club on Oct. 30, 2018, in London. (Photo: David M. Benett/Getty Images)

The British organization that has targeted The Federalist, a U.S. online magazine, is a relatively new nonprofit that primarily has gone after websites in the United Kingdom.

NBC News cited Stop Funding Fake News, a project of the Center for Countering Digital Hate, in pushing Google to demonetize The Federalist, a mainstream conservative news and opinion site.

Demonetizing would be accomplished if Google didn’t allow The Federalist to carry Google Ads. However, Google has denied this. The British organization also has targeted Zero Hedge, a financial website.

Here are four key things to know about Stop Funding Fake News and the Center for Countering Digital Hate.

1. What Is Stop Funding Fake News?

In writing about content at The Federalist, NBC News cited both the Center for Countering Digital Hate and Stop Funding Fake News as sources.

According to its website, Stop Funding Fake News was established in May as a project of the Center for Countering Digital Hate.

It mostly names British outlets as “fake” and boasts: “Since we launched, we’ve seen one of our target fake news sites completely shut down, and the capacity of several others reduced significantly as a result of us damaging their ability to raise revenue.”

Stop Funding Fake News identifies the site it helped shut down as Westmonster, a media outlet established by pro-Brexit businessman Arron Banks and Michael Heaver, a former aide to Brexit Party leader Nigel Farage. However, the website does appear to still exist, primarily as an aggregator.

We invite brands and people to consider whether they want their adverts to appear next to hate and untruths. (Spoiler alert: turns out paying for hate and Fake News is not a great look.)

By helping hate-filled clickbait and Fake News gain revenue from advertising, Google has put money ahead of morality, and advantaged outrage over facts.

It lists numerous companies and organizations that it says stopped advertising on various websites because of its work. These include the World Wildlife Foundation, the University of Oxford, eBay, Adobe, The Week, and The Royal British Legion.

News organizations should be skeptical of a nonprofit that arbitrarily labels another media outlet as “fake news” without learning more, said Hayden Ludwig, an investigative researcher with the Capital Research Center, a Washington-based watchdog group for nonprofits.

Ludwig noted a similarity with media and businesses that unquestioningly accept the Southern Poverty Law Center’s arbitrary labeling of organizations they disagree with as “hate groups.”

“I can see a parallel between so-called fake news and hate groups. No doubt that there are real hate groups and fake news, but what the SPLC does is run an ugly smear campaign against conservative organizations supporting legitimate, mainstream positions,” Ludwig told The Daily Signal in an email. “It’s the same deal as the MSM [mainstream media]. These groups don’t play fair and they aren’t interested in debate over issues; this is a way for activists to shut down all public discourse so the left can ram through its agenda.”

“It should absolutely concern every American that shadowy foreign interests are trying to manipulate our media for political gain,” Ludwig said. “They have no accountability in the U.S., no transparency, no publicly available filings. I think it’s perfectly reasonable for people to expect some basic information about these groups trying to influence our politics.”

2. What Is the Center for Countering Digital Hate?

Founded in December 2017, the organization  was incorporated as a nonprofit in October 2018, according to the British government.

Originally founded as Brixton Endeavors Limited, its name was changed in August 2019 to the Center for Countering Digital Hate.

The London-based center says on its website that it seeks to “disrupt the architecture of online hate and misinformation,” adding:

Over time these actors, advocating diverse causes—from anti-feminism to ethnic nationalism to denial of scientific consensus—have formed a Digital Counter Enlightenment. Their trolling, disinformation and skilled advocacy of their causes has resocialized the offline world for the worse. …

CCDH’s solutions seek to increase the economic, political and social costs of all parts of the infrastructure—the actors, systems and culture—that support, and often profit from hate and misinformation.

Beyond the project Stop Funding Fake News, the center’s other programs include Don’t Feed the Trolls and Don’t Spread the Virus.

The British government endorsed the center as the entity to correct disinformation about the coronavirus pandemic through its Don’t Spread the Virus campaign.

“CCDH have also forced social media companies to establish precedent and remove hateful or dangerous speech by holding them directly accountable for their tolerance of hateful content,” the website says.

“We’ve spent four years and countless news stories with the left and the press whining about alleged foreign interference,” Gainor told The Daily Signal. “They never really cared. They were just upset it wasn’t advocating for their leftist candidates. Now CCDH comes along and the press is thrilled to the point of doing their bidding—because it’s targeting a bunch of conservative sites.”

Using the “hate” label is just a way to silence others, Gainor said:

All of these fascist anti-hate groups are the biggest hate groups on the internet. They don’t believe in free speech, free press, or anything else in our First Amendment. In the case of CCDH, they want to silence any speech they disagree with—to help fix a presidential election. They should be made to register as foreign agents, just as RT and other foreign propaganda outlets were made to do.

3. Who Founded the Organization?

Imran Ahmed, who has been active in Britain’s left-leaning Labour Party, founded the Center for Countering Digital Hate in December 2017.

Ahmed often appears on British TV talking about what he considers hateful content on the internet and social media. He has focused on misinformation, extremism, fake news, and trolling.

In April, Ahmed was appointed to the steering committee of the British government’s Commission on Countering Extremism Pilot Task Force.

The steering committee has two roles: to decide which incidents to prioritize for discussion and to meet local stakeholders to help develop responses to incidents of hateful extremism.

Before starting the nonprofit, Ahmed was a senior political adviser to the Labour Party’s Hilary Benn, a member of the House of Lords, from 2012 through 2016. He was an aide during Benn’s 2015 reelection campaign and the 2016 referendum on Brexit.

In 2016, Ahmed went to work for the Labour Party’s Angela Eagle, a member of the House of Commons, who vied for a leadership post.

Eagle and Ahmed co-authored the book “The New Serfdom: The Triumph of Conservative Ideas and How to Defeat Them.” Through a liberal viewpoint, the book attacked the legacy of free market economist Friedrich Hayek, a conservative icon famous for the book “The Road to Serfdom.”

Before working in politics, Ahmed worked for Merrill Lynch as a strategy consultant.

4. What Are the Board’s Political Connections?

The Center for Countering Digital Hate has a five-member board of directors that oversees its activities, one of whom has ties to the progressive movement in the United States.

The organization doesn’t list any staff other than Rachel Riley, who has the title of patron.

Board member Simon Clark has been a nonresident senior fellow at the Center for American Progress since May 2018. At the liberal Washington-based think tank, Clark specializes in domestic right-wing terrorism and trans-Atlantic relations.

Clark has a background in investing and venture capital. He joined the Center for Countering Digital Hate’s board only last month.

Board member Siobhan McAndrew is a sociology professor at the University of Bristol. She specializes in “culture, religion and value change,” according to her webpage at the university. She published a paper last year on violence by left-wing extremist groups.

Board member Kirsty McNeill is executive director of Save the Children UK. She was an adviser to former British Prime Minister Gordon Brown of the Labour Party.

Jonny Oates, a member of the Liberal Democrats, serves in the House of Lords. Another board member, Ayesha Saran, is migration program manager at Barrow Cadbury Trust, a London-based charitable foundation that advocates “social justice.”

A sixth board member, Morgan McSweeney, resigned earlier this year to become chief of staff for Labour leader Keir Starmer.