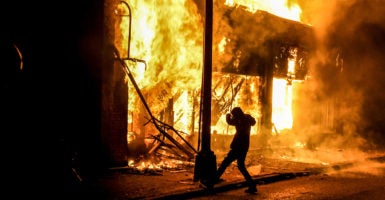 A protester kicks a stone into a burning building set on fire during a demonstration in Minneapolis May 29, 2020, over the death of George Floyd, a black man who died after a white policeman kneeled on his neck for several minutes. (Photo: Chandan Khanna/ AFP/Getty Images)

The owner of a manufacturing company based in Minneapolis has decided to move his factory after law enforcement was unable to protect the plant from burning during riots.

The plant shut down early in anticipation of the second night of riots and to ensure the safety of employees, the Minneapolis Star Tribune reported.

Kris Wyrobek, president and owner of 7-Sigma Inc., said a production supervisor and maintenance worker who live near the plant kept watch over the business and reported a fire at an apartment complex next door.

A manufacturing company that has been in Minneapolis since 1987 has decided to leave the city.

The company’s owner said he can’t trust public officials who allowed his plant to burn during the recent riots: “They don’t care about my business.” https://t.co/rMcZgudJCb

“They don’t care about my business. They didn’t protect our people. We were all on our own,” Wyrobek told the Tribune. “The fire engine was just sitting there, but they wouldn’t do anything. That’s the frustrating thing to us.”

“We were on our own those first few nights. There were simply more people destroying property, more people setting fires, than any city government could respond to at once,” Frey said.

Frey has a news conference scheduled for Monday to announce the development of a group of business and community leaders to advise the city on rebuilding efforts, according to the Tribune.

Wyrobek said it’s “too late” to keep his company in Minneapolis, the move will take about 50 jobs with it, the Tribune reported.

Wyrobek said, “We are sorting through the rubble, trying to figure out how to get this operational again. We are cautiously optimistic we can do that. But we are certainly not able to do that in Minneapolis,” the Tribune reported.

Wyrobek’s company, 7-Sigma Inc., produces mannequins used in medical training programs along with the precision rollers utilized by high-speed printing systems that produce bank statements and Social Security checks, according to the Tribune.