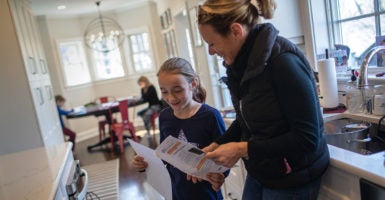 Carlynn Sweeney helps her daughter Clementine, 9, during homeschooling on March 18 in New Rochelle, New York. Schools in New Rochelle, a hot spot in the U.S. for the coronavirus pandemic, were suspended on March 13, and parents have been tasked with carrying out distance learning programs at home. (Photo: John Moore/Getty Images)

The government has closed most schools.

So, more parents are teaching kids at home.

That upsets the government school monopoly.

Without state schooling, “learning losses … could well be catastrophic,” says The New York Times. Homeschooling “will set back a generation of children,” according to a Washington Post column. Harvard Magazine’s “Risks of Homeschooling” article quotes a professor who calls for a “presumptive ban.”

The professional education establishment actually tried to ban it 98 years ago. Then, it tried to ban private schools, too! But the Supreme Court stopped it, writing, “a child is not the mere creature of the state.”

I wish the state would remember that.

Anyway, the educator’s complaints about homeschooling “setting back a generation” are bunk.

In my new video, education researcher Corey DeAngelis explains, “Children who are homeschooled get much better academic and social results than kids in government schools.”

Even though they are more likely to be poor, “Homeschoolers score 30% higher on SAT tests.” They also do better in college, and they are less likely to drink or do drugs.

“Mass homeschooling during this pandemic,” says DeAngelis, “may actually be a blessing.”

Debbie Dabin, a mom in Utah, is one of many parents who started homeschooling this spring and now is “definitely considering homeschooling” next year.

Dabin bought teaching materials over the internet from a company called “The Good and the Beautiful.” Her son likes the lessons better than what he got in school. “It’s great,” Dabin says. “He likes the activities; he wants to do them.”

Before the pandemic, he’d told his mom he hated school.

I hated school, too. Classes were boring. Listening to lectures is a poor way to learn, and unnecessary today.

In addition to homeschool teaching programs, there are also free internet games that teach things like math, reading, and writing, while customizing the speed of lessons to each learner’s needs.

Michael Rebell, a professor at Teachers College at Columbia University, worries that if parents homeschool, “There’s no guarantee that kids are learning democratic values, civic knowledge.”

“Were they learning that in their regular schools?” I asked.

“Well … it’s in the curriculum,” he responded.

So what? The Nation’s Report Card, the government’s biggest nationwide test, reveals that government school students don’t know much about history or civics.

One question asked fourth graders, “Which country was the leading communist nation during the Cold War?” Only 21% answered the Soviet Union. More said France or Germany. American students did worse than if they had guessed randomly.

Another question: “America fought Hitler and Germany in which war?” More picked the Civil War than World War II.

“You sound like you think—because there’s regulation, that makes something happen,” I said.

“I do,” he replied. “Where there’s no regulation, that’s a worse situation.”

But “no regulation” is the wrong way to think about it. There is plenty of regulation. It just comes from legislators and families instead of education bureaucrats.

If this pandemic steers more parents away from state schools, that’s probably a good thing.

Philosopher John Stuart Mill warned: “State education is a mere contrivance for moulding people to be exactly like one another … which pleases the predominant power in the government [and] establishes a despotism over the mind.”

A silver lining to this pandemic is that now more parents are learning about their options outside the government system.