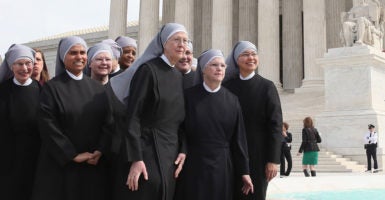 The world’s most tenacious nuns were back at the Supreme Court on Wednesday morning, when the justices heard oral arguments in the latest round of the nearly eight-year saga surrounding the Affordable Care Act’s onerous contraception mandate.

In light of the COVID-19 pandemic, the high court made the unusual and unprecedented move of hearing the consolidated cases of Little Sisters of the Poor v. Commonwealth of Pennsylvania and Trump v. Pennsylvania, as well as several others, via teleconference. C-SPAN and other news outlets carried the arguments live.

Justice Ruth Bader Ginsburg participated in the arguments from a hospital bed.

If you thought the Little Sisters already won big at the Supreme Court, you’d be right. Now they’re fighting to preserve that earlier victory.

So why exactly are the Little Sisters—an order of Catholic nuns committed to serving the elderly poor—once again forced to go to the high court to defend their rights of conscience? Let’s review.

The Obama administration provided very narrow and wholly inadequate exemptions, which effectively applied only to houses of worship and later, their integrated auxiliaries (such as church-run soup kitchens).

But other religious employers—including hospitals, schools, social service organizations, and other entities—remained responsible for complying with the mandate despite their sincere moral or religious objections.

That’s a problem, because this onerous mandate, as interpreted by the Obama-era HHS, placed a substantial, but unnecessary, burden on religious organizations, employers, and individuals. Because of their beliefs concerning the protection of unborn human life, they faced the untenable decision of whether to violate their sincerely held religious or moral beliefs, pay steep fines, or forgo offering or obtaining health insurance entirely.

Fortunately, that’s not the end of the story.

In 2016, in Zubik v. Burwell, the justices unanimously ordered lower courts to reconsider the claims brought by the Little Sisters and others in light of the government’s admission that it could facilitate contraceptive coverage without involving objecting parties.

The following year, the Trump administration’s HHS issued interim final rules to provide much-needed relief for employers and educational institutions with religious or moral objections to the mandate.

Those rules were finalized in 2018, and predictably, spawned another round of challenges, specifically from the states of Pennsylvania and New Jersey, which sought to invalidate the protections for religious liberty provided in the new rules.

Opponents of the new rules characterize them as a way to deny women access to contraception, but they do no such thing. As I previously explained on The Daily Signal, the regulations “allow those with objections to not be complicit in choices that would violate their religious or moral convictions.” I wrote:

Women remain free to make their own decisions about the drugs and devices at issue in the mandate, and will be able to purchase or find coverage for them without trampling on the sincere moral or religious objections of those who wish to not be implicated in subsidizing them.

Importantly, Pennsylvania does not identify a single real person who previously had contraceptive coverage but who would lose it because of the Trump administration’s rule.

The states challenging the new rules assert that Congress did not provide statutory authority for HHS to exempt religious objectors from the regulatory requirement to provide health plans that include contraceptive coverage.

The states further argued that Health and Human Services adopted the new rules in a procedurally flawed manner, and—in what only can be described as Kafkaesque reasoning—that the Little Sisters, whose litigation helped lead to the development and implementation of those rules, lacked standing to defend them.

That’s where things stood as of Wednesday morning’s oral arguments.

Encouraging Signs in the Arguments

U.S. Solicitor General Noel Francisco began by arguing that those new rules reflect the “best traditions of this country’s commitment to religious liberty.”

Ginsburg, though, pushed back by stating that a “glaring feature of what the government has done in expanding this exemption is to toss to the wind entirely Congress’s instruction that women need and shall have seamless, no-cost, comprehensive coverage.”

Ginsburg later said: “This idea that the balance has to be all for the Little Sisters-type organizations and not at all for the women, just seems to me to rub against our history of accommodation, of tolerance, of respect for divergent views.”

After Francisco finished his arguments, Paul Clement, himself a former solicitor general during the George W. Bush administration, rose to argue for his clients, the Little Sisters of the Poor.

Clement also faced questions from a seemingly skeptical Justice Sonia Sotomayor, who asked how this situation would differ from a hypothetical one in which employers objected to providing reimbursement for a COVID-19 vaccine.

Sotomayor said she saw no difference, and in her view, the employers presumably would be required to provide it.

Justice Neil Gorsuch took a different tack. He asked Clement to focus on the procedural arguments raised by the case. Justice Elena Kagan did the same with Pennsylvania’s attorney.

In an encouraging exchange for the Little Sisters and their supporters, Justice Samuel Alito asked Pennsylvania’s lawyer some tough questions. Alito said:

Hobby Lobby held that if a person sincerely believes that it is immoral to perform an act that has the effect of enabling another person to commit an immoral act, a federal court does not have the right to say that this person is wrong on the question of moral complicity.

That’s precisely the situation here. Reading the 3rd Circuit’s discussion of the substantial-burden question, I wondered whether they had read that part of the Hobby Lobby decision.

In a welcome development, Justice Clarence Thomas, who typically doesn’t ask any questions from the bench, engaged in an incisive back-and-forth with the advocates over two important issues that might have otherwise been glossed over: the standing of the states to bring this suit and the propriety of nationwide injunctions in cases such as these.

The issue of a nationwide injunction, especially, has been an important topic recently that could have broad implications in a variety of cases.

Overall, it’s hard to read the tea leaves from many Supreme Court arguments, and this argument was no exception. But the questions from the justices do highlight where they may be apt to focus in reaching their decisions.

You don’t have to share the beliefs of the Little Sisters of the Poor to acknowledge that the government should not be able to force them to set aside their convictions, especially when they serve the poor and help heal the sick outside the four walls of a church.

Those are services that—as their lawyer told the justices—the nuns might have to reconsider or restructure in order not to violate the dictates of their conscience if they were to lose this case.

America has a proud tradition of respecting the rights of conscience, which enable us to act in harmony with our sincerely held beliefs in the public square. The final rules issued by the Trump administration recognize this fundamental principle and give much-needed, meaningful relief from an unnecessary assault on the rights of conscience.

Hopefully, the Supreme Court will recognize that and provide relief to these weary nuns and other Americans of faith.

After all, who really wants to be against the Little Sisters of the Poor?