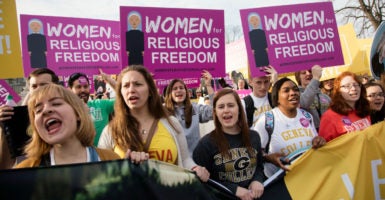 Dozens of organizations have sued the Department of Health and Human Services over its 2011 mandate requiring nearly all health insurance plans to cover abortion-inducing drugs and contraceptives. (Photo: Jeff Malet Photography/Newscom)

Among Obamacare’s many problems, one of the most troubling is its mandate that nearly all insurance plans must cover abortion-inducing drugs and contraception.

As Congress moves to repeal and replace the onerous health care law, the Trump administration is taking steps to free Americans with conscience objections from this onerous requirement, known as the “HHS mandate.”

On May 23, the Office of Management and Budget indicated that it is reviewing an interim final rule regarding current exemptions to the contraception mandate.

A leaked draft copy indicates that, where the Obama administration proposed wholly inadequate “accommodations” for religious liberty, the Trump administration intends to provide a definitive exemption for individuals, employers, and insurers with religious or moral objections to all or some of the Department of Health and Human Services mandate.

This is sound policy that should be finalized to defend religious liberty, as President Donald Trump has promised to do.

Of course, it is unfortunate that exemptions are necessary in the first place. Obamacare requires certain categories of “preventive services” to be covered with no enrollee cost sharing.

Following Obamacare’s enactment, the Department of Health and Human Services issued guidelines specifying that the additional types of preventive services for women that health insurance plans must cover include all Food and Drug Administration-approved contraceptive methods and sterilization procedures—which includes certain abortion-inducing drugs.

This onerous mandate is a burden on employers, individuals, and religious organizations who, because of their beliefs concerning the protection of unborn human life, are faced with the decision to violate sincerely held religious or moral beliefs, pay steep fines, or forgo offering or obtaining health insurance entirely.

But other religious employers (such as hospitals, schools, and social service organizations) and businesses remained responsible for complying with the mandate, despite sincere moral or religious objections.

The Supreme Court has given relief to closely held businesses (in Burwell v. Hobby Lobby) and to certain religious institutions (in Zubik v. Burwell), but many individuals, employers, and organizations remain subject to the mandate.

While many on the left are caricaturing this new draft rule as denying women access to contraception, the proposed policy would do no such thing. It would merely allow those with objections to not be complicit in choices that would violate their religious or moral convictions.

The draft interim final rule also points out that the proposed exemptions do not “undermine the operation of the many other programs subsidizing contraception” for women at the federal, state, and local level.

The interim final rule outlines both the exemption (or in some cases, an optional accommodation) process for objecting entities and individuals.

It also outlines how women will remain free to make their own decisions about, and purchase or find coverage for, the drugs and devices at issue in the mandate without trampling on sincere moral and/or religious objections to the mandate’s provisions.

The Trump administration has taken an encouraging step to provide relief to those who have raised objections to one of Obamacare’s most egregious assaults on rights of conscience and religious liberty, but the underlying law that led to the coercive contraception mandate remains in place.

Obamacare is continuing to trample on conscience rights in other ways. Heritage Foundation visiting fellow Sarah Torre has written extensively about how “legislative loopholes and onerous mandates” in Obamacare “entangle taxpayer funds in abortion coverage offered on the exchanges and force many Americans to pay an abortion surcharge with private dollars.”

And as Heritage’s Ryan T. Anderson notes, Obamacare also threatens “medical professionals and health care organizations that, as a matter of faith, moral conviction, or professional medical judgment, believe that maleness and femaleness are biological realities to be respected and affirmed, not altered or treated as diseases.”

Ultimately, Congress should repeal Obamacare, allow states to be free from federal insurance mandates, and establish a health care system that empowers all Americans to obtain a plan that meets their needs and reflects their values.