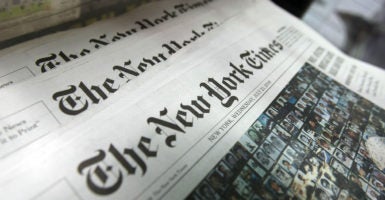 The Pulitzer will help The New York Times ignore the discovery that the 1619 Project is riddled with mistakes and exaggerations. Pictured: Copies of The New York Times sit for sale July 23, 2008, in New York City. (Photo: Mario Tama/Getty Images) 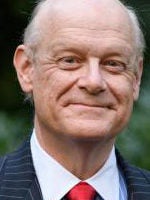 Allen C. Guelzo, a historian, is senior research scholar in the Council of the Humanities and director of the Initiative on Politics and Statesmanship in the James Madison Program at Princeton University.

The awarding of a Pulitzer Prize for commentary to Nikole Hannah-Jones for her lead essay in The New York Times Magazine’s “The 1619 Project” comes on the heels of the severe criticism that has been heaped on the project by at least two groups of American historians, by African American activists (led by Robert Woodson and the 1776 Initiative), and by numerous other academics and journalists (among them Cathy Young, Phillip Magness, John McWhorter, and Lucas Morel).

What is most surprising is that the Pulitzer has been awarded precisely for Hannah-Jones’ lead essay—even after one of the 1619 Project’s consulting historians pointed out errors that Hannah-Jones had waved away, forcing The New York Times to issue a “correction.”

Why this curious persistence in supporting a “project” with so many defects?

One reason that suggests itself is journalistic hubris. Journalists like to speak of journalism as “the first draft of history.” Historians will tell you otherwise. It’s their job to correct the myths the journalists perpetuate.

In this case, the Pulitzer will help The New York Times face down the discovery that the 1619 Project—and not just Hannah-Jones’ lead essay—is riddled with mistakes and exaggerations.

Among the most egregious of those errors are the claims that the American Revolution was designed to protect slavery.

That no shred of evidence for this assertion exists did nothing to discourage the energy with which it was promoted in Hannah-Jones’ lead essay.

Major American historians—notably, my Princeton colleague Sean Wilentz and Gordon Wood, the dean of historians of the Revolution—rejected out of hand the notion that the Founders’ Revolution was executed in defense of slaveholding.

Almost as exotic is the 1619 Project’s claim that plantation slavery was a model for a capitalist economy.

The second essay in the 1619 Project cited plantation bookkeeping and concentrations of Southern capital as proof that American capitalism had its origins in slavery. But this is contradicted by the economic data on Northern bank capitalization, and by the energy with which Southern slaveholders and their apologists attacked capitalism as their enemy, and favorably compared plantation slavery not to capitalism, but to socialism.

But nothing strikes the reader as odd as the announcement that President Abraham Lincoln was a racist who regarded blacks as a “problem” and planned their deportation.

If Lincoln had been as deeply tinged with racism as the 1619 Project claims, it’s a marvel beyond imagining that this same Lincoln wrote an Emancipation Proclamation that freed 3 million slaves, put black men in U.S. uniforms and gave them guns with which to kill white supremacists in Confederate gray, and was murdered in 1865 after delivering a speech advocating the first extension of the vote to African Americans.

Those are all matters of enormous historical complexity, but they are treated by the 1619 Project with a wave of the hand and no research.

We have seen journalistic irresponsibility before. (Think Walter Duranty, Janet Cooke, and Jayson Blair.) It grows out of the credulity of the public, the inexperience of journalists, the pressure to write dramatic copy that will fill space in a relentless 24-hour news cycle, and the confidence that the intent of the articles would be politically applauded as an act of virtue-signaling, no matter what the content.

All one can do, however, is speak truth. Truth is great and will prevail. “Fashion always had, and will have, its day,” wrote the great British painter John Constable, “but truth in all things only will last, and can only have just claims on posterity.”